'Wrightshous' was a old mansion seen on the Adair map of 1682 just to the north of 'Brunsfield' (Bruntsfield House) long before the current terminology came into use. The name is probably derived from the mansion house of the Laird of Wryte. Later cottages grew up around the mansion, which were called 'Wrychtishousis' (Wright's Houses). The original cottages were demolished in 1791 to make way for the Toll Road, now called Bruntsfield Place. The name, Wright's Houses, was used to refer to the triangle of houses on the east. The old mansion was demolished in 1800, when James Gillespie built a 'Hospital', later used as the Royal Asylum and School for the Blind, only part of which remains.

On 14th June 1716, Edinburgh City Council gave a lease to James Brownhill for a plot of land on the west of Bruntsfield Links, where he build a large tavern and out-houses as a commercial proposition in 1717. The main building was called 'Golfhall'. Over the next two centuries, it would be known as Foxton, the Golf House Tavern and the Golf Hotel.  Early tenants were the vintners, Robert Kello and Robert Biggar, and the bow-maker and golf club-maker, George Neilson. In 1760, Thomas Comb, who had been trained by Neilson as a club-maker, bought the premises with David Baptie, a publican.  Two years later Comb took sole ownership. He occupied the large parlour on the ground floor, while David Baptie and his son ran the pub on the first floor.  The first meetings of the Royal Burgess (then called the Society of Golfers in and around Edinburgh) and the Bruntsfield Links golf societies were minuted in Thomas Comb's in Golfhall.

Thos Comb sold up in 1778, though he continued to lease part of the premises until his death there in 1797.  Meantime, Alexander Fraser had became the publican following the Babties.  The first floor flat was sold and a two-storey extension was built onto the front of the building.  For a brief period after 1792, the Burgess club rented room in 'Captain Rollo's house', nearby for their clubs and used Edinburgh taverns for their meetings. The Bruntsfield Links golfing society stayed, served by Mrs Adam Henderson, the landlady who acted as their club-mistress. During this period, Peter McEwan began his successful golf club manufacturing business at Wright's Houses, with his brother-in-law William Gourlay making golf balls in the same street.

Golfhall can be seen in a 1746 watercolour by Paul Sandby. It is the house on the right of the two houses in middle ground of the picture below. This was only the second picture to depict golf in Scotland. 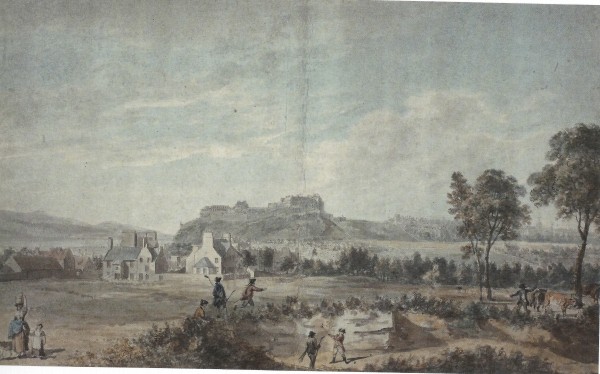 By 1814, the Burgess had returned to the Golf House Tavern, when it was extended with a new 'ballroom' in the garden. Recently an engraving of it at this time has been found. Soon afterwards, it became 27-28 Wrights Houses, when street numbers were introduced and it is shown on the Ordnance Survey maps of 1849 and 1876 as the 'Golf House Tavern'. Noted publicans in the Golf House Tavern were Charles Stewart and Margaret Stewart (1814-39), Robert Goodsman and his wife (1840-55), Charles Calver (1856-63), Mr and Mrs James Anderson (1864-67).

When James Connolly became the landlord in 1868, he renamed it the Golf Hotel. It is depicted as such in many pictures including an etching shown here and in the photograph below with a 'For Sale' sign on it.  The Bruntsfield Link Golfing Society moved out in 1852, but the Burgess club met there until they moved to Musselburgh in 1874. Connolly stayed until 1885, but by this time the Links were congested and the City Council was wanting to get rid of the golfers.

Wrights Houses showing the gable end of Golf Hotel (27-28 Wrights Houses), and to the left of it, 26 Wrights Houses, used as workshop of Thomas Carruthers golf club-maker. Photo c1900 from City of Edinburgh Libraries

The last inn-keeper was Theresa Crook (1886-98), previously James Connolly's barmaid. The Braid Hills golf course opened in 1889 and enticed the remaining golfers away. The premises ceased to be a tavern.  A short-hole course was laid out on Bruntsfield Links, looked after by Alexander Tivendale the first green-keeper and resident at Wright's House. Golfhall was demolished when the garage in Bruntsfield Place was built in mid-1950s and the land was used for student association housing in 1987.

Two doors down from the Golf House Tavern is 30/31 Wrights Houses which was built c1831. It can be seen in the picture below. The first floor became the club-house of the Bruntsfield Links Golfing Society in 1852, where they were looked after by Mary Gilchrist, a laundress who lived with her mother on the top floor. Four years later the Club moved into the ground floor with Jane Stewart as their club-mistress.  The Bruntsfield Links club officially moved to Musselburgh in 1876, but they maintained clubhouse arrangements at 30 Wright's Houses for aged members until 1894.

In 1898, the brewers, James Muir & Co, hired Robert Cameron, a well-known architect, to remodel 30/31 Wright's Houses into the pub seen today.  He changed the façade and moved the door from the centre to the right hand side. He also named it the Ye Olde Golf Tavern and gave it its legendary date of 1456. Following this renovation other golf clubs including the Bruntsfield Allied, Edinburgh Thistle and Bruntsfield Short-Hole club began making use of the Tavern.  The Golf Tavern is the only one of the original buildings still existing and is the oldest, longest serving, golf clubhouse in the world.

Later in 19th century, when golf became more popular, golf club makers took leases on properties in the area. Some notable ones were:-

Their premises are seen in the picture below where some of their shop signs are just visible.

Wrights Houses 32-36 which were at some point Thomas Carruther's house (32), William Frier's workshop (34) and Douglas McEwan and Frank Doleman workshops (36). Photo believed to be in City of Edinburgh Libraries