Golf history in the west of Scotland did not shine as early as that in the east. The rainfall in the west is higher because the clouds make landfall there from the Atlantic. Today there are well-known golf links courses in the south-west of Scotland, but in the 16th and 17th Centuries, golf was a game played between December and March, when the grass was naturally cropped short and there was no agricultural work to be done. At this time Glasgow was quite small and in the winter, prominent Scots from the shires went to Edinburgh for the social 'season' and the convenience of warmer winter city living. This meant they mainly played their golf in the east.

First mentions of golf in the west, as elsewhere, are in the annals of the Kirk. In 1589, the Glasgow Kirk Session decreed 'no golf, carrict, shinnie, in the High or Blackfriars yard, Sunday or weekday'. As this stricture does not limit itself to just 'Sunday observance', it may have been occasioned by the dangers of playing ball and stick games in confined spaces, much as you see the signs today 'NO BALL GAMES ALLOWED.' The location also implies the game being banned could have been the target game. 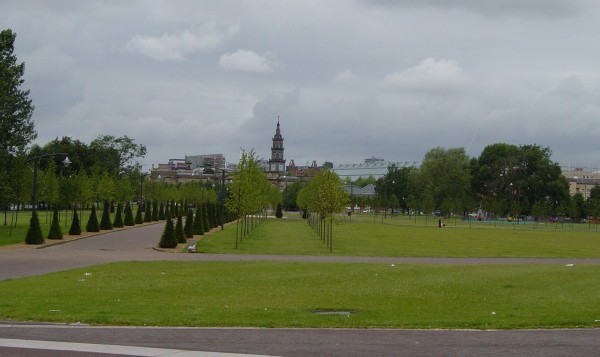 There were no coastal links easily accessible to the good burgesses of Glasgow in the early days of golf, so they used Glasgow Green, which has been landscaped and looks different now to the time when the golfers played there.

In 1642, Glasgow University, like St Andrews University in the same year, declared their approval of such sports as 'Gouffe, Archerie, and the lyk ' (like). In 1674, there is a record of golf equipment being bought for the young Earl William of Annandale, who was attending Glasgow Grammar School.

In 1721, James Arbuckle, a student at Glasgow University, wrote a poem about the River Clyde, which was titled 'Glotta' on a reprint in 1810. In it, he incidentally records several details about golf on Glasgow Green, the clubs and the game, though he does not appear to have been a golfer himself.

In Winter too, when hoary Frosts o'erspread,
The verdant Turf, and naked lay the Mead,
The vig'rous Youth commence the sportive War,
And arm'd with Lead, their jointed Clubs prepare;
The Timber Curve to Leathern Orbs apply,
Compact, Elastic, to pervade the Sky:
These to the distant Hole they drive;
They claim the Stakes who thither first arrive.

Care in needed in interpreting exact details of poems, given the difficulties of poetic rhyme and the 'licence' poets take as a result.

There was a lodge on Glasgow Green, used as a golf clubhouse, which is known to have been extended in 1760 and the Council issued permits for  golfing from 1780. Glasgow Golf Club played on the Green from 1787 to about 1835. After which the club went into abeyance, apart from two meetings in 1848 and 1860s.  When the club was fully revived in 1870 it moved to Queen's Park because the Green was 'common' ground and becoming congested. From the beginning of the 19th Century play had became difficult, which doubtless contributed to the club's decline in this period. The overcrowding was compounded by a municipal drainage scheme in 1813, which apparently made the area 'unpleasant'. This role is now fulfilled by the local brewery.

There are many historical sights on Glasgow Green including the Templeton Business Centre built in 1839 as a carpet factory as well as the Peoples Palace, opened in 1898, which commemorates the history of Glasgow from 1750 to the present day.

The Nelson Monument on Glasgow Green, begun in 1806, was the first civic monument to the Napoleonic War's great maritime hero, and would have been a prominent feature for the golfers. Only four years after it was built, the monument was struck by lightning, breaking 6m (20 feet) off the top. Even today the damage is still visible. 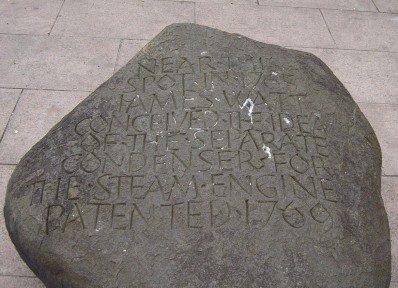 One early visitor to Glasgow Green was James Watt. In his account of his invention of the improved steam engine, James Watt referred to the 'Golf Course' on Glasgow Green. While walking on Glasgow Green one Sunday in 1765, he passed by the old washhouse and, before he had reached the Golf Course, he had developed a clear vision of the separate steam condenser, which greatly improved the efficiency of steam engines and began the industrial age. The event is commemorated on the Green by the James Watt Boulder, pictured above.

Good job he was not hit by a golf ball.