Golf was first played on the ‘toune links’ to the east of North Berwick.  According to early maps, the ‘Toune Lands’ stretched from East Road/Quadrant to the Mill burn, just west of where Glen Golf Club clubhouse now stands. This is still open space with tennis courts and Castlehill for walking, but it is no longer used for golf. 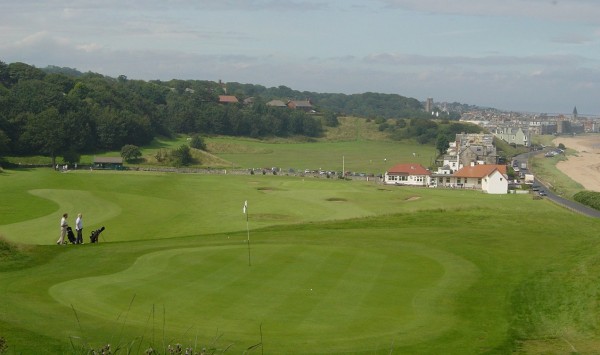 The earliest reference to golf in North Berwick is in the Kirk Session Book in January 1611, when first Thomas Gowan and then Alex Lockart were accused of playing on Sunday.

January 20th 1611
On quilk day the repentance of Thomas Gowan and others was required by humbling themselves on their knees and craving god forgiveness for prophaning the Sabbath ye 6th January instant for playing at the goulf.

January 22nd 1611
The gudeman of North Berwick delatit Alex Lockart as a prophanor of the Sabbath for playing at the golf.

For their punishment, they were made to sit on ‘pillory stools’ while the parish minister Thomas Bannatyne preached them a sermon; an normal week-end really.

On 1st January 1671, the same council minutes report 'shinnie' (shinty) being played on Sunday. This is significant because it means the two games were being distinguished from each other.

Teams from the East and West Gait were playing schinnie on the Sabbath last, in the afternoon.

In 1672, Sir John Baird, who was Lord Newbyth and Lord of Session, is recorded as playing his friend 'Gosford' at North Berwick. This was the same year that Sir John Foulis, Keeper of the Sasines, played 'Gosford' at Musselburgh. There was clearly a clique of legal eagle golfers playing in East Lothian in this period.

Much is known about Sir John Baird (1620–1698), who was a Scottish advocate and politician. He became a knight sometime prior 1653. He was fined 2,400 Scottish pounds in 1662, after the restoration of King Charles II, for his part as a Covenanter in the war which had seen Charles's father deposed and beheaded.

In 1664, Sir John was created an Ordinary Lord of Session. He took the title of Lord Newbyth and he represented Aberdeenshire in the Scottish parliaments of 1665 and 1667. His eminence was such that in 1670 he was nominated one of the Commissioners to negotiate the Treaty of Union between Scotland and England, which eventually took place in 1707, after he was dead. So, when he played at North Berwick in 1672, he was a very important person. 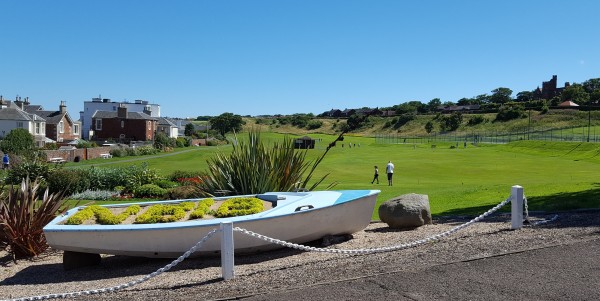 Town Lands looking east to Castle Hill, where golfing at North Berwick took place until end of the 18th century.

From East to West Links

A minute in the North Berwick Town Council records of 27th March 1728 forbad golfers from playing in the summer grazing months between March and September. This would not have been a hardship for them as the animal grazing was necessary to keep grass short enough to play on.

'The Baliffs and Council order that intimation be publickie made that no person suffer their horses, sheep, or swine to pasture upon the common green until the same be broken up and that non play at the golf, nor go through with carts or horses to prejud the growing of grass'.

This stricture was repeated in 1775, indicating that golf was sufficiently popular to create problems to other inhabitants in North Berwick. This time golfers were required to use forecaddies to keep others out of harm’s way or face a penalty of a 12 shilling fine. Castle Hill was a blind drive, so it was a reasonable precaution. The extract from the Council records of 21st March 1775 reads.

'The Magistrates and Council gave order to discharge all Golfing on the Toune Green on the south side of the road leading from the Toune to the Milns and over Castlehill after 25th of this month till the first of September next and so on yearly without liberty asked and given by one of the Magistrates or Toune Treasurer. And no person or persons shall be permitted to play at golf over the Castlehill without a runner before to forewarn passengers passing or repassing to keep out of harm's way and the Magistrates are impowered at any time to stop all idle persons from golfing on the green to the prejudice of the pasture ground, and for every trespass of this Act the Magistrates or Magistrate at the time are impowered to draw a fine of twelve shillings Scots toties quoties.'

Houses began to be built on the east links from 1816, when the first ‘feus’ (ground rents) were granted. There was legal action to prevent Castle Hill being feued in 1863. We know that golf on the east links had ceased at this point because witnesses in the legal action claimed not to have seen it played there in their lifetime, implying the game had moved to the west links sometime at the end of the 18th century or the early 19th century. 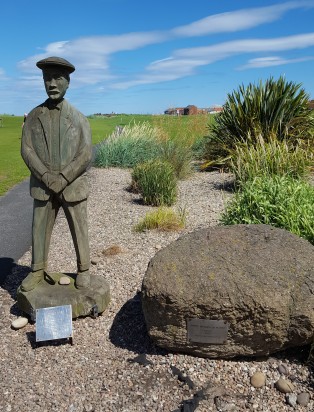 In 1894, a nine-hole golf course was laid out by Ben Sayers, assisted by James Braid, on the Rhodes Links, to the east of the Mill Burn.

This course was extended to 18 holes in 1906 to become the Burgh Course, which is when the Glen Golf Club was formed. It has been there ever since, just over the river from the original golfing ground at North Berwick.