Coloured Flags and 'Out' and 'In'

Many golfers have wondered why there are different coloured or colored flags on golf courses on the front and back nine holes.

Even today, the Old Course, like most early courses, has the ninth hole as the furthest away from the clubhouse. The first nine are still the 'out' nine, then you turn to play back 'in'. It was not until well into the twentieth century that the convention of two circles of nine holes, beginning and ending near the clubhouse, became fashionable. 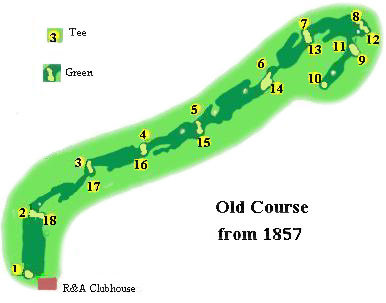 On the St Andrews Old Course, the holes were laid out in a hockey stick line and the middle holes were always played twice. In 1764, the golfers decided to combine the first four holes into two, which produced a round of 18 holes, though it was really 10 holes of which 8 were played twice, to the same hole, once out and once back.

There is a layout showing that the 5th Hole O'Cross green had two holes by 1836, and Daw Anderson created a double green on 7th in 1855, but it was not until 1857  that Allan Robertson was paid to put second holes in all the 8 middle double greens, creating a proper 18-hole round.

At this point, red and white coloured flags were used to distinguish between them, as reported in May 1857 in the Fifeshire Journal:-

The putting greens have had a thorough overhaul, re-turfed and otherwise improved. On each green, with the exception of the first and return, two holes have been placed; the one is played to by parties going outwards, the other in the in-coming. To prevent mistakes, the outgoing hole is supplied with a white flag, and its neighbour sports a red one, that being the colour for all the return holes. This is a decided improvement on the old system, preventing confusion and delays which often had to be put up with , on medal days especially when a party going out encountered another winding their way homewards on the same green, there being only one hole betwixt them.

The credit for these innovations, is given to Sir Hugh Lyon Playfair, captain of R&A for the year 1856-57.

The double greens explain the origin of the different coloured flags, as you needed these at St Andrews to tell you to which hole you are playing on the middle double greens. However, this did not include the eighteenth hole, which on the Old Course still has the same white flag as the that of the first nine holes. For many years the direction of play on the Old Course was alternately clockwise or anti-clockwise each week to manage the wear on the course. In these circumstances the flags would be very useful even to local golfers. 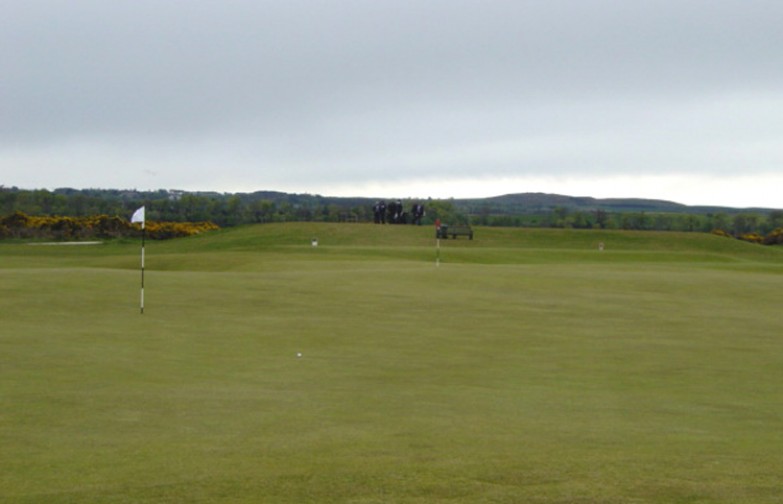 The adoption of different coloured flags by other courses for the front and back nine holes seems to be a misunderstanding of this situation as the double greens is a problem they did not have. To further confuse matters, when Old Tom created a new first green and separated it from the famous 17th 'Road Hole', he continued to use the red 'in' flag on the 17th green, which means that there is no logic to the use of coloured flags on any golf course in the world.

The first noted golf course to have white and red flags for the outward and inward nine is Carnoustie, when Old Tom expanded it to 18-holes in 1873.

By about 1875, Old Tom Morris had, amongst other improvements to bunkers, greens and fairways, created separate teeing areas at St Andrews, which produced the present layout. Many credit Old Tom with the creation of the manicured golf course that we see today.