The etymology for the word "Fore!" is not absolutely certain. The Oxford English Dictionary records its first use in 1878 as a warning cry to people in front of a golf stroke and, like most people, believes it is an abbreviation of the word 'before'. There is an earlier reference in 1857 in a glossary of golfing terms. Its origin is almost certainly earlier and bound up with that of the word Caddie.

Currently there are three explanations for the origins of term FORE!

Because golf balls were expensive, golfers employed "Forecaddies" to stand where the ball might land and reduce the number of lost balls, as is done in tournaments today.

In 1824 the Rules of the Thistle Golf Club recount a conversation which a youthful Mr Tytler of Woodhouselee, an 'Antiquary' in Edinburgh,  had with the aged Andrew Dickson when he said that he had performing this role for the Duke of York in 1681 at Leith Links.

Dickson was then performing the duty of what is now commonly called a fore-cady.

It is probable that golfers shouted to their 'Forecaddie!', who would always be some distance ahead to draw attention to the fact the ball was coming and, in time, this was shortened to 'Fore! The almost contemporaneous appearance of the terms caddie, fore-caddie and Fore! supports this theory over the others.

Shoot over their heads!

A second explanation, still given by the USGA, derives from the military battle craft of musket days, when rank after rank would fire fusillades, some over the heads of those in front. It was speculated that the term Fore! might have been used to warn those in front to keep their heads down. Modern historians pour cold water on this theory, partly because it is difficult to relate it to a Scottish golf connection and partly because the relevant military terms used do not bear any relation.  However, this theory may in fact be a misunderstanding of the theory below.

Ware Before! - the John Knox story

There is a third explanation, which appears utterly implausible, but which is an outside possibility. It derives from a story told by John Knox (1505?-1572) the 'hell-fire' protestant reformer. He tells the tale, as only hell-fire preachers can, of someone arriving at the East Port (east gate) of Leith. This story was noticed by Dr Neilson and subsequently reported by Robert Browning in his book 'History of Golf' (1955) thus:

'One among many comes to the East Port of Leith, where lay two great pieces of ordnance, and where their enemies were known to be, and cried to his fellows that were at the gate making defence: "Ware Before!" and so fires one great piece, and thereafter the other.'

So Fore!' could be derived from an artillery term warning gunners to stand clear. This last explanation means, firstly, that the term 'Ware Before!' (Beware Before!) was foreshortened to Fore! (rather than Ware!) and, secondly, it must have been sufficiently well known to be used by golfers.

Frankly, I had always thought only the 'Forecaddie' explanation was plausible, until a construction company dug up a body next door to where I worked in Leith. It turned out the body was two thousand years old, but, more importantly, it was lying next to the last and only known remnant of Ramsay's Fort, shown in the picture here. This was part of the great fortifications that ringed Leith, including the aforementioned East Gate, which were built by the French to withstand the Siege of Leith by the English in 1560. The English did not take the fort, but the fortifications were destroyed not long afterwards as part of the uneasy peace with England. However, there are still two hillocks on Leith Links, allegedly gun embankments called 'Lady Fife's Brae' and 'Giant's Brae built by Sir William Pelham, Captain of the English Pioneers, in 1560. Giants Brae can be seen in the background of the picture shown on the history of Leith Links. 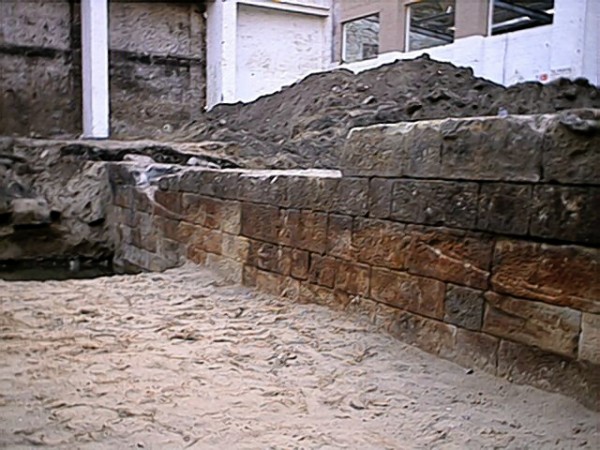 The pictured remains of Ramsay's Fort have mostly been recovered but the builders left a small pit so that top of part of the wall can be seen in the car park of new flats on Tower Street.

The years that John Knox could have been in Leith to hear of the story of the guns overlaps only this fort. Given the somewhat contrary nature of his views, he was often either in exile, or a prisoner or latterly at Berwick during his adult life.

In researching the history and layout of Ramsay's Fort, it became clear that the East Gate directly overlooked the Links where golfers were playing, as best they could, among all the military preparations and sieges that went on in the middle of the 16th Century. 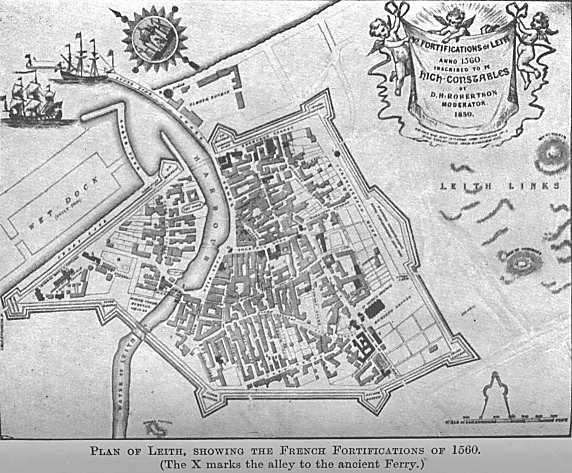 The plan shown is an 1830 depiction of the 1560 fortifications, but mirrors earlier plans. The last parts of the walls disappeared in early Victorian times, when Leith Assembly rooms were built. Ramsay's Fort was a triangular stone bastion on the right side of the river mouth. Most of the rest of the walls were earthen works.

The gunners and the golfers would have got to know each well as they each practiced their arts at Leith Links. Today the north links is built up, and only a small part of the south links remains

The noise of the gunnery practice would be remembered, if heard. It is possible the gunners used the term to warn the golfers, when they were practicing firing and the golfers then began to use it among themselves. The golf players at Leith Links were influential people in political and golfing terms. If they used the term, others would follow. However the fort was destroyed after only a short number of years, so it could be the gunnery cry lived on only in the memory of the golfers, which might explain why they foreshortened the term to 'Fore!' as a misremembering of the term.