The first known Rules of Golf were drawn up in 1744 in Edinburgh for the world's first 'open' golf competition at Leith by the Gentlemen Golfers of Edinburgh, who would go on to become The Honourable Company of Edinburgh Golfers.

THE FIRST SET OF RULES OF GOLF

Articles & Laws in Playing at Golf.

1. You must Tee your Ball within a Club's length of the Hole.

2. Your Tee must be upon the Ground.

3. You are not to change the Ball which you Strike off the Tee.

4. You are not to remove Stones, Bones or any Break Club, for the sake of playing your Ball, Except upon the fair Green and that only / within a Club's length of your Ball.

5. If your Ball comes among watter, or any wattery filth, you are at liberty to take out your Ball & bringing it behind the hazard and Teeing it, you may play it with any Club and allow your Adversary a Stroke for so getting out your Ball.

6. If your Balls be found any where touching one another, You are to lift the first Ball, till you play the last.

7. At Holling, you are to play your Ball honestly for the Hole, and not to play upon your Adversary's Ball, not lying in your way to the Hole.

8. If you should lose your Ball, by it's being taken up, or any other way, you are to go back to the Spot, where you struck last, & drop another Ball, And allow your adversary a Stroke for the misfortune.

9. No man at Holling his Ball, is to be allowed, to mark his way to the Hole with his Club, or anything else.

10. If a Ball be stopp'd by any Person, Horse, Dog or anything else, The Ball so stop'd must be play'd where it lyes.

11. If you draw your Club in Order to Strike, & proceed so far in the Stroke as to be e Accounted a Stroke.

12. He whose Ball lyes farthest from the Hole is obliged to play first.

13. Neither Trench, Ditch or Dyke, made for the preservation of the Links, nor the Scholar's Holes, or the Soldier's Lines, Shall be accounted a Hazard; But the Ball is to be taken out teed /and play'd with any Iron Club.

The rules were drawn up at the behest of the City of Edinburgh Council, who had presented the silver club prize and insisted that there had to be rules for the competition. The competition was open to all gentlemen golfers in Britain, but only local players participated. This tells us that there were no prior rules, and maybe if it had not been for Edinburgh Council, the golfers would not have drawn up rules themselves. 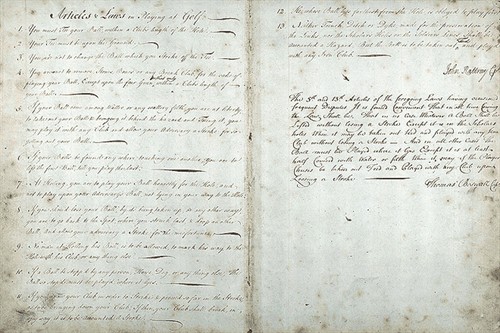 Rules of Golf, signed by John Rattray Captain 1744-47 and 1751 with amendments by Thomas Boswell Captain 1758. The original is in National Library of Scotland. A thousand copies were made and distributed by Hon Co and are on display in the golf museum at St Andrews and club-houses of many old golf societies.

For centuries, the original rules were thought lost, but in 1937 they were re-discovered by Mr CB Clapcott on two pages at the back of a Minute Book of the Honourable Company. The pages contained thirteen Articles and the signature of John Rattray, as Captain. As he was 'Captain of the Golf' in 1744-1747 and 1751, we cannot be sure what the date of these rules is, but as they were copied verbatim for use in St Andrews in 1754, we can be sure they applied at this time.

There is a later amendment clarifying rules 5 and 13 also written on the same document. It is signed by Thomas Boswell who was Captain of the Leith golfers in 1758, but who had previously won the St Andrews competition in a play-off in 1755.

The golfers at St Andrews, who would later become the Royal & Ancient Golf Club of St Andrews, adopted the Leith rules for their own competition in 1754. They wrote them into their minutes, with only a small amendment to Rule 5, but strangely they included references to 'the Soldiers' lines' and 'the Scholars' holes' in Rule 13 that only existed at Leith. In the eighteenth century, other clubs, including the Burgess at Bruntsfield Links in Edinburgh and those at Aberdeen and Crail also drew up their own rules.

Sometimes these rules would differ in important ways. The most serious example of the problems this could create occurred at the medal competition on 18th July 1807 of the Burgess club at Bruntsfield Links. It concerned the 'Stymie', which allowed an opponent to position their ball between your ball and the hole. Under the Leith rules you could lift the ball, much as you can today, but under the Brunonian rules, you could not and you had to play round or you risked a penalty on hitting the other ball. The winner, Francis Braidwood, had used the Leith rules to lift an opponent's ball and there was an objection. The initial ruling was that the match would be replayed on 1st August 1807 under the 'Leith' rules, but this was not the end of the matter and many members continued to object until the club virtually split into two with separate captains. The matter rumbled on until April 1809, when a reconciliation was effected, which, included the astonishing condition that all the papers and minutes of the last two years would be burnt to ensure that there was no records of the insults that had been traded. The chronicler of the Burgess records with some regret that this was diligently carried out.

In the nineteenth century, apart from later editions of rules for the clubs already mentioned, rules from Blackheath, Bruntsfield Links, Burntisland, Dunbar,  Glasgow, Haddington, Innerleven, Leith Thistle, Montrose, Musselburgh, North Berwick, Perth, RIoW, Royal Wimbledon and Tantallon have all been recorded. These and earlier and later rules can be found on Rules History website.

One of the most famous of these is the Thistle Golf Club Rules in 1824, which also contained the first history of golf, and is therefore a valued work.

The Royal & Ancient Golf Club (R&A) began selling subsidised copies of the rules of golf at 6d (6 pence) when the cost was 9d (9 pence).  In 1897, they were given control of the Rules and Golf by the common agreement of the existing clubs, who were mostly British. The R&A published the first 'national' set of rules in 1899.

The US Golfing Association, founded in 1894, adopted the R&A rules of 1899 and published them in 1900 for American golfers. Golf associations outside of USA and Mexico continued to recognise the jurisdiction of the R&A in the matter of the rules of golf. For fifty years from 1900, the R&A and the USGA operated separately but, since 1952, they have worked co-operatively to produce a universal code.