Origin of the Tee and the Stymie

Golfers of the 19th Century, in the living memory of the early historians, all say that the 'tee' was the area where from which you played and they 'tee'd' on the ground, as laid down in the first rules of golf 1744 - 'Your Tee must be upon the Ground'. Golfers at this time used sand to make a tee within one club length of the previous hole, later expanded to within two and later still four club lengths.

There is a 'tee' in curling, derived from the Gaelic word 'tigh' meaning house. The House is the coloured circles that form the target area and the curling 'tee' today is the line through the centre of the 'house' and is the target not the release line, which is the 'hog' line.  As the first golf tees were within a 'circle' of one club length round the hole, this could be the origin of the term.

The golf tee or 'teaz' has similarities to the Dutch word 'tuitje' pronounced 'tytee' and meaning a little conical shape, which referred to the little piles of sand or snow that would be used for the tee'ing off stroke.  This looks a more likely origin of the term, especially given the probable origin of the 'Stymie' is from the Dutch 'stuit mij' pronounced 'sty me' meaning 'it stops me'. The word itself (as stimies) did not appear in the Rules until the 1834 Musselburgh rules, since when its interpretation had been the subject of many disputes.  The most serious of these was in the Burgess club in 1807.  The stymie was not abolished until 1951.

It was not apparently until Old Tom Morris created separate teeing areas at St Andrews in 1875, as reported in the press, that this defined area became common place. The motivation could well have been to speed up play as otherwise golfers were waiting for the groups to tee off after they had holed out, before they could play to the green, which must have been twice as aggravating as just waiting for them to putt out.

The ball must be teed not nearer the hole than eight nor farther than twelve club lengths, except where special ground has been marked by the Conservator of the Links, which shall be considered the ‘teeing ground,’ and the balls shall be teed within, and not in advance of, such marks.

RULES FOR THE GAME OF GOLF as it is played by the Royal & Ancient Golf Club of St Andrews over the Links. September 1875.

Although a designated tee'ing ground may not have come about until 1875, it is possible that stone tee markers were in existence a century earlier.  There is a reference to 'golf stones' in 1781 in a newspaper report at Aberdeen.

For centuries, golfers made tees from sand. This was messy and towels and water were provided to wash the golfers' hands as they are today to wash golf balls. Often caddies would scoop out sand from the bottom of the hole to make the tee and this caused the hole to deteriorate and clubs often issued reminders that sand should not be taken from holes. 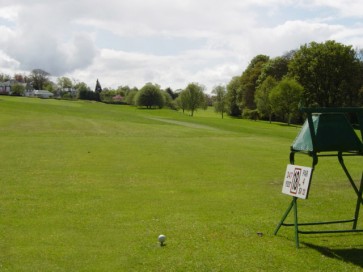 One answer to this was the provision of sand boxes, which are still found on old courses, such as Bruntsfield Links and Earlsferry Links, though nowadays they contain fertilised soil for filling in divots on the teeing ground.

Throughout the end of the 19th Century and the beginning of the 20th Century, golfers began trying to create re-usable tees, using cork, paper or rubber. (Although the crosse (chole) players have graduated to using screw caps as their tees, early 'colf' and later 'kolf' had died out before anyone thought of developing more sophisticated tees.)

Patented Tees and the Reddy Tee

The Singular History of the Golf Tee by IR Valenta (1995) documents that the earliest known portable golf tee was invented by two members of the Tantallon Golf Club at North Berwick William Bloxsom Secretary and Arthur Douglas in 1889, and was a small rubber slab resting flat on the ground, with three vertical rubber prongs or a hollow rubber tube to hold the ball in place. The patent 12,941 was granted in April 1890.

The first tee to penetrate the ground was the "Perfectum" tee, for which a British patent was granted in 1892 to Percy Ellis. It comprised a rubber circle with a metal spike that was pushed into the ground. A variation of this, the "Victor" tee, with a cup-shaped rubber top connected to a ground spike was patented by PM Matthews of Scotland in 1897.

The first United States patent for a golf tee was issued to the Glaswegian David Dalziel on 8th September 1896. The patent was for a rubber tee with a flat base and slightly concave top, in combination with an artificial ground surface.

On 12th December 1899, an American dentist, Dr George F Grant, one of the first black graduates of Harvard College, was the first American to patent a tee that he had invented in 1898. It was a peg with a rubber top and was pushed into the ground, and is very close to the modern tee, but it did not have a concave head. He did not market it and neither this nor any other previous tee inventions caught on.

The first commercial golf tee, which is the one we know today, was the Reddy Tee invented at Maplewood Golf Club in 1921 by another American dentist William Lowell.

First manufactured in wood and painted with red tops so that they could be seen easily, they were soon produced in a variety of styles and materials. The "Reddy Tee" made of white celluloid by the Nieblo Manufacturing Company, was patented in 1924. Although plastic tees are available, simple wooden tees similar to those made in the 1920s are still the most common type.

Thus the final aspect of the game we know today was put in place.