This is the most in-depth 'history of the golf' to date. David Hamilton has reviewed previous histories to produce a detailed account of golf history from the early medieval origins to the middle of the twentieth century - all from a Scottish perspective. Seven chapters cover, in chronological order, the 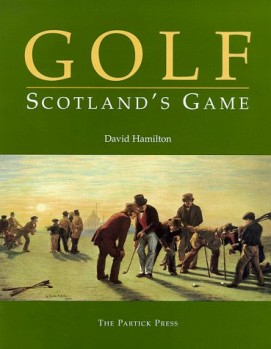 Hamilton looks at every aspect of the game including the development of the golf balls through wooden, feathery, gutta percha and modern balls as well as the progression of golf clubs from wooden affairs to iron and metal ones. Though some of the topics are patchy in places, such the role of Prestwick and the early Open competitions, the depth of the research can be gauged by the fact that there are over 7 pages of further reading; 15 small font pages of detailed footnotes; and the index runs to 6 pages.