Bonnie Prince Charlie and Golf at the Villa Borghese

Villa Borghese in Rome is the oldest golfing site outside Britain. Bonnie Prince Charlie is reported as playing golf there c1738, by Lord Elcho, an eye-witness and one-time confidant. 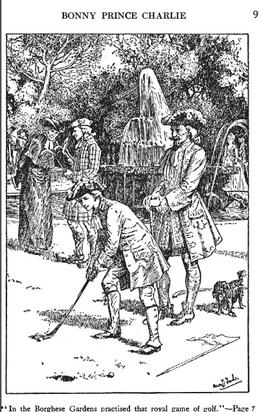 Lord Elcho was born in 1721, the eldest son of the 5th Earl of Wemyss. After his education at Winchester College, he travelled to Europe and visited Rome in the winter of 1740/41, where he had an audience with James Stuart, son of the deposed King James II/VII and known to history as the Old Pretender. It was a fateful meeting as a result of which Elcho would lose his estates and would not become Earl, even though he outlived his father. This was because he was introduced to Prince Charles Edward Stuart, who was only a few months older than he was, and he later joined the Prince in the 1745 Jacobite Rebellion, as a Colonel in the Jacobite Horse Guards. This rebellion came to a disastrous end at the Battle of Culloden in 1746. Lord Elcho survived Culloden and fled abroad where he died in Paris in 1787. His estates were forfeit and the Wemyss title was in abeyance during his lifetime and passed thereafter to his younger brother.

Before Lord Elcho died, he wrote a journal, still in the possession of the Wemyss Estate. It detailed the history of the rebellion and mentioned, among other details, that when he met Prince Charles in Rome in 1740, Charles was fond of shooting and played golf in the grounds around the Villa Borghese.

'Prince Edward', as he invariably calls him throughout the pages of his journal, 'did not speak much to those who called on him,' he writes, 'but chiefly amused himself in shooting thrushes and blackbirds and playing "golf" in the grounds of the Villa Borghese;..'

Report of Lord Elcho's Journal in 'The Life and Times of Prince Charles Stuart, Count of Albany, commonly called the Young Pretender' by Alexander Ewart, (1833) p 46

Lord Elcho himself does not appear to have been a golfer. At least, he never mentions it and it certainly appears to be the conclusion from the reported quotation remarks on the word "golf" in his Journal. He would have have known the game, as the Wemyss family were well connected to golf. (They even had their own golf course in the 19th century). Lord Elcho's father, the 4th Earl, had been a member of the Royal Company of Archers since 1714 and by 1743 he was their Captain General and well acquainted with the Archer members who formed the Leith Golfers. For a few years, Lord Elcho was also a member of the RCA.

After the failure of the Jacobite Rebellion, Lord Elcho became disillusioned with the Young Pretender. He felt that Prince Charles had let the Scots down and listened to bad advice. The Elcho Journal was written many years after the events it described, but there is no reason to doubt this reported golf fact was not accurate.  However, as other contemporary accounts do not mention golf in Rome, though they say that Prince Charles and his brother playing in the grounds of the Villa Borghese, we can surmise that the golf may not have been frequent. The Stuart family in exile lived elsewhere in France and Italy, but no reports of golf in any of these places have been found at this time.

The story of Bonnie Prince Charlie and the Glorious '45 is well documented and need not be rehearsed here. The early and later years of his life are not so widely known, which is why this golf event does not feature prominently in many histories.

Prince Charles was born on 31 December 1720 in the Palazzo Muti, a large townhouse in the Piazza dei Santi Apostoli in Rome, which the Pope had given to his father. He and his younger brother had a privileged but loving upbringing and often played in Villa Borghese, which was only a short walk away.

After the failure of the Rebellion in 1746, he went to France but he was expelled two years later, following the peace between France and Britain. For a period, Charles lived with Clementina Walkinshaw, his Scottish mistress, with whom he had a daughter in 1753, called Charlotte. In 1772, Charles married Princess Louise of Stolberg-Gedern. For two years they lived in Rome, before moving to Florence where he bought the Palazzo di San Clemente. He appears to have become an alcoholic and his wife left him eight years into the marriage, citing abuse.   A few years after that, he formally adopted his daughter Charlotte, who was later known as the Countess von Alberstrof.

Prince Charles' name has recently been linked to the oldest golf clubs in existence, now at the British Golf Museum and known as the Troon Clubs, but which were actually found in Hull in 1898. They carry the royal Stuart symbols and have been dated to mid-18th century. Another certain connection between the Prince and golf is that his personal physician during the '45 Rebellion was Dr John Rattray, the Captain of the Leith Golfers. Rattray was jailed as a result of supporting the Prince and he was only freed by the intervention of Lord Forbes, another prominent golfer of the day.

Charles Stuart died in Rome in 1788. At first, he was buried in Frascati Cathedral, where his brother Henry was Bishop. Later, his body (apart from his heart) was moved to St. Peter's Basilica in the Vatican to be next to his father. His heart remained in Frascati Cathedral. Although his daughter Charlotte had been given the title "Her Royal Highness" by her father, she had no right of succession to the throne and the Stuart claims died with her.

The Villa Borghese is the name given to a large park in the north-east of Rome. It was once a vineyard, but was turned into a park in early 17th century by Cardinal Scipione Borghese, patron of the sculptor Bernini.  Today the park is filled with tree lined walks, laid out in the early 19th century. There are, however, still several open areas. While not ideal for golf (it is very muddy after rain -  see picture below), it would probably have been perfectly serviceable as a golf course most days of the year in the 18th century.

The park has two horse 'race-tracks', one of which, called the Piazza di Siena (sic), was used for the dressage at the 1960 Rome Olympics and again in 2018 for an international horse show. 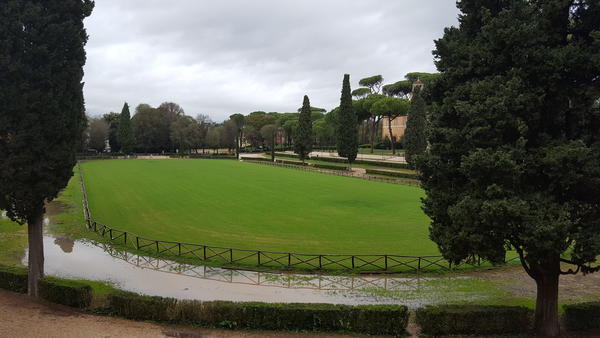 The Villa Borghese is better known to modern tourists for the Galeria Borghese, one of the finest private collections of antiquities and paintings anywhere in the world. It is not a large museum and entry is by timed ticket only. Other museums in the park or within walking distance of the park are the Villa Medici, the Museo Carlo Bilotti and the Modern Art Museum, as well as the Villa Julia, with its extensive Etruscan collection. For children, there is a play-space in the historic Casina di Raffaello as well the Zoo just to the north of the Park. 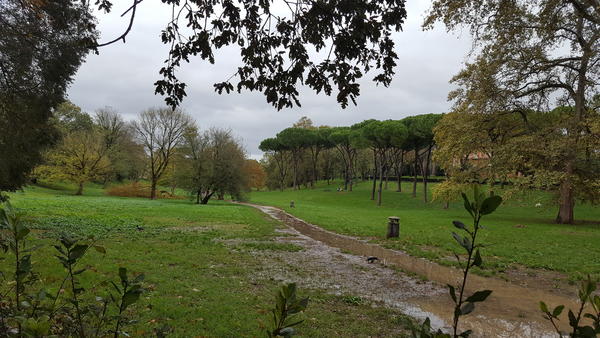 On the western edge of the park of the Villa Borghese is the Terrazza del Pincio with good views over the city and the Vatican and the Piazza del Popolo, where the well-known Santa Maria del Popolo Church is located.