This list is probably of more interest to golf historians than golfers in general, for which the oldest societies and courses are more commonly referenced. However, the 18-hole course is central to the game of golf and created changes to courses all over the world. It is based on developments at the Old Course at St Andrews. By 1764, it was 10 holes, of which the middle 8 holes were played twice making a round of 18 holes. 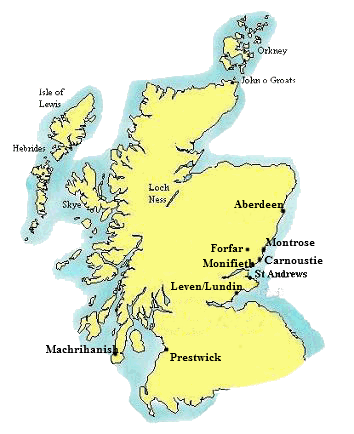 To speed up play, two holes were added to the middle greens. The 5th hole (Hole O'Cross) seems to have been the first to have been adapted as shown on the 1836 William Chalmers plan of the Old Course.  In 1855, the R&A minutes report that Daw Anderson added a second hole to the 7th High Hole.  Two years later, following work by Allan Robertson, all the middle greens had two holes in time for play at the Spring Meeting. The Fifeshire Journal reported these new arrangements as a great success which included the use of coloured flags for out & in holes.  This created the mind-set in the golfers of a course of 18 holes and thereafter at intervals of 2 to 3 years other courses were increased to 18 holes.

The main influence in the spread of 18-hole courses seems to have been members of the R&A, who were also members of other clubs and who wanted the same rules and standard round as they had at St Andrews.

The only early Scottish 18-hole course that would qualify for this list, of which no part is playable today, is Innerleven's Dubbieside course. Another early English course, had it survived is Coldham Common, at Cambridge, which was 9 holes in 1876 and 18 holes in 1887, though it was once accorded the title of the 'worst course' ever seen.

The original Leven/Lundin course is largely intact. though split over two golf clubs. It is recreated annually as the 'Macdonald' course and otherwise only playable as two halves of Leven Links and Lundin Links.  Two other courses - Old Luffness (Luffness New/Gullane 2) and Aberdeen Old Links (Kings Links)- were effectively abandoned and are playable only as minor parts of later courses.

Forfar (1871) and Kingsdown (1880) were built as 18-hole courses. Royal Jersey (1878/1883) may have been, but it is not certain. All the other courses were increased from fewer holes requiring additional land to be acquired. Their development was driven by the availability of this land, which is largely what decided the timetable of their expansion to 18 holes.

By the middle of the 19th century, courses outside Scotland are coming to the fore. Prominent among these is Royston, which recent research has shown should be added to this list. The Royston course was the first 18-hole course outside Scotland and was laid out by two Cambridge students, and, although it was abandoned in 1871, it was resurrected in 1892.  By now, English golfers were of growing significance in golf. The Royal Blackheath golfers were victors in the first inter-club foresomes championship held at Prestwick in 1857.  The English author and Amateur Champion, Horace Hutchinson was influential in promoting the game in England. Eleven of these 18-hole courses feature in his work British Golf Links  - St Andrews, Montrose, Leven, Wimbledon, Hoylake, Carnoustie, Westward Ho!, Pau, North Berwick, Machrihanish, Prestwick