The first noted mention of golf in the area is in the Parish of Wemyss in 1748, when the unfortunate Mr James Grubb was hit on the knee by a golf ball and complications from this injury caused him to lose his leg. We do not know exactly where the incident took place.

It is believed that golf had been played on Leven Links for a many years before Matthew Elder presented the Leven Golf Club with an inscribed silver medal on 20th March 1847, considered the beginning of the club. There are references to golf being played over three holes between the windmill of the salt works and the mouth of Scoonie Burn in the early 1800s. There is now a Scoonie golf course, beside the Scoonie burn north of the Leven Links.

In any case, immediately prior to the minute of the formal club beginning there is a note headed

Play at the time was on land to the east of the town owned by Mr R Maitland Christie of Durie and leased to Mr Thompson of Scoonie Farm as grazing ground. In these days, the club had no rights to the ground, only the right to “play over the links.” It is the ground played today.

The course was initially nine holes to the ‘Mile Dyke’ and the work to construct it was undertaken by the Leven members. In 1865, the club asked Old Tom Morris to advise on the positioning of bunkers.

In 1867 or so, Innerleven Golf Club decided to leave their course Dubbieside and play at Leven. Innerleven made a contribution to Leven Golf Club of £10 in recognition of the work the Leven members had done, as “they had brought the Links into fine condition.”

Leven Thistle Golf Club was formed in 1867 as an artisan club and while it may only have had a few dozen local members, it attracted golfers from a wide area. Over the next thirty years, the roll increased to 600 members, making it one of the strongest clubs in Scotland.

When Lundin Mill Golf Club was formed in 1868, the 9 holes of Leven were extended to 18 to take in the coastal area east of the Mile Dyke up to the sand dunes of Lundin Links. This land was owned by John Gilmour of Montrave, who became Sir John Gilmour and a future Captain of The Royal & Ancient Golf Club of St Andrews. Old Tom Morris made another visit, believed to be to advise on the links extension, and for this work he was paid £1 1s (1 pound and 1 shilling) plus expenses of 10/6 (10 shillings and 6 pennies). There were two starting points for this extended course. Leven members started in the west and Lundin members from the east.

Lundin Links looking back to Leven

The opening of the full 18-hole course was marked by a 36-hole match on October 2, 1868, which Young Tom Morris won with a score of 170; his father returned 189 strokes. The course over which they played is probably the first modern golf course as we understand it, in that it had 18 fairways and 18 greens. St Andrews at this time had double greens and common fairways and although Montrose had 18 holes and played them in medals, it would not be until 1888 that they had a defined 18-hole course.

The first captain of the Lundin Golf Club was Mr Rintoull of Lahill, who had been the immediate Past Captain of the Innerleven club and had been influential in the decision by the Innerleven to abandon the Dubbieside Links. Given the distances and travel facilities of the time, the new course would have been much more convenient for him, as it was half the distance of going to Dubbieside from his estate.

At this time, four clubs were playing over the same course: - Innerleven (1820), Leven Golfing Club (1846), Leven Thistle (1867) and Lundin Mill (1868). The running of the links gradually fell to Innerleven, as Leven Golfing Club had suffered from both the formation of Leven Thistle and the arrival of Innerleven from Dubbieside. The Lundin Mill club also struggled from 1877-1889. Effectively no club activities were taking place, though Leven made payments on their behalf to make sure the Lundin club's rights of play on the links were preserved.

In July, 1870, the Standard Assurance Company (now Standard Life), who owned the course, presented the Innerleven Golf Club with an 'Amateur Champion Medal' to be played for by the members of the Leven clubs and such others as they invited from other clubs, but excluding golf-club makers and professionals. This quickly became an established fixture on the golfing calendar, with entrants coming from all over the UK and abroad. This is believed to be the oldest open amateur stroke play competition in the world. Today, it is a 72-hole tournament, with a cut after 36 holes for the top 40.

Lundin revived strongly after 1889. It soon had four times as many members as Leven and built a clubhouse at the east end of the course in 1896. In 1908, Lundin took sole occupancy the Links east of the Mile Dyke.

Leven Golf Club initiated a revival in April 1909, but this was not without some opposition from Innerleven and Leven Thistle.

Shortly afterward, the course was divided at the Mile Dyke, the original boundary of the 1846 Leven course. Lundin Golf Club took the east section of the old course and the old Lundin Ladies course to create a new 18 holes course. To compensate the Ladies, they rented land north of the railway line and arranged for a new ladies course. James Braid was involved in the design of both the new Lundin course and the new Lundin Ladies course, greatly adding to their prestige. 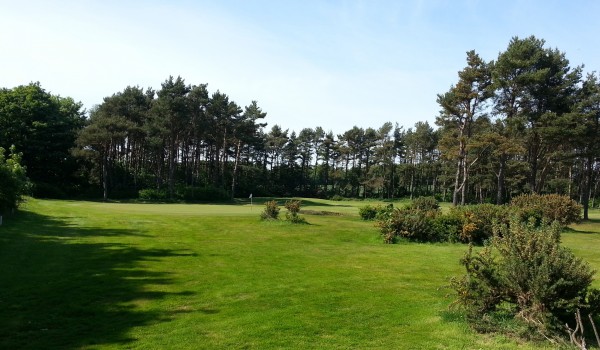 At the west end of the old course, the Leven clubs took over the football grounds, north of the bowling green to extend their half of the course to 18 holes.

Annually the Leven and Lundin clubs recreate the 'Macdonald Trophy course' playing over the ground of the old 18-hole course of 1868. To play this layout on other days necessitates playing both Leven course and the Lundin course. The table below shows the original Leven/Lundin Links and how the holes relate to the modern Macdonald Trophy course.

In 1951, Lundin Golf Club were fortunate to be able to buy their course and clubhouse from the Montrave estate. In 1971 they bought the railway land.