King James IV, who effectively lifted the 'ban' on golf in 1502 by buying the first set of clubs from Perth, is also recording as spending money on golf clubs and balls in 1504, almost certainly at Falkland Palace to play golf at St Andrews.  The Royal Court moved from palace to palace in those days and Falkland Palace was the Stuart 'sporty' palace. Other expenditures on golf and clubs and balls are noted in 1506, when the King may have been at Edinburgh or Stirling.

In 1552, Archbishop John Hamilton of St Andrews was given a charter to establish a rabbit warren on the north part of the links. The Charter confirmed the rights of the local populace to  use the links, inter alia, to play golf on the links at St Andrews.  These rights were confirmed in subsequent local and royal charters.

In 1583, 1598 and 1599, as elsewhere in Scotland, there are records in the Kirk Sessions in St Andrews of sinners being taken to task to task for playing on the 'golf fieldis' on the Sabbath (Sunday). However, as much as they were banning golf, the Kirk was also promoting it. Many ministers trained at St Andrews and learnt golf there and took it with them throughout Scotland.

Students of the Golf

St Andrews University was founded in 1413 and one of its earliest graduates, Sir Gilbert Hay, scholar and international traveller, is probably the first individual writer to use the word 'golf', which he did in a poem in 1460.

The first noted student golfer at St Andrews is in about 1574, when golf 'club and balls' are recorded in the diaries of James Melville.  He studied Theology there from 1571 to 1574, though he is listed in the roll of entrants to his college in 1569. His father was Minister in Maryton, near Montrose, where he was taught golf at school. While at St Andrews, Melville was provided with he 'necessars' (necessaries) for 'archerie and golf'. While he was there his uncle, Andrew Melville, preached a sermon in the town against the self-indulgence of the Pryor, including the fact he played golf, presumably to excess.

Other religious students at St Andrews associated with golf include Bishop George Graham who graduated from St Andrews c1588. His son and grandson have recently been noted to be purchasers of golf equipment in Orkney.

James IV had made education compulsory for the landowning classes, as he wanted an educated elite to help him run the country. This meant many aristocrats sent their sons to school at St Andrews, where they learnt golf and archery, as well Latin and religious studies. They were accompanied by servants, who recorded the disbursements they made. Several of these accounts survive and many include golf items.

Early in the following century, James Graham, who became Earl of Montrose in 1626, was a student at St Andrews and his records note expenditure on golf items during his studies in 1628-1629. The named supplier of his clubs was James Pett, but whether he was a club-maker or just sold them is not specified.  He was a notorious golfer and met an unfortunate end in 1650 in a failed rebellion against Parliament.

A decade later, Francis Scott, the 2nd Earl of Buccleuch (1626-1651), and his brother David, were also students at St Andrews in 1636-38, playing golf and doing archery. They were attended by their servant Patrick Scott, who rendered detailed accounts of the dozens golf balls that they used up. Patrick saved money by bulk buying 5 or 6 dozen at a time direct from the ball-maker, Andrew Rynde. Rynde is the first known golf ball-maker at St Andrews.

Between 1712 and 1715, the three sons of John Mackenzie, a lawyer and the Laird of Delvine in Perthshire also spent money of golf clubs and balls. Intriguingly, the clubs and balls bought for Alexander Mackenzie, the eldest son, cost twice as much as those bought for his two younger twin brothers Kenneth and Thomas.

The students were not the only university members playing golf. The Regent of St Andrews University was too. He was Alexander Munro and he was a friend of John Mackenzie above and he wrote him a letter on 27th April 1691 in which he referred to St Andrews as the 'metropolis of Golfing'. With the letter, Munro sent Mackenzie

An and ane are the Scots words for one. This set would have been a driving wood, a lofting wood and an iron club. He also sent him 'ane Dozen of Golfe balls.' This may imply a better local supply of clubs and balls compared to Perth.

The makers of some of these balls and clubs were George and Henry Milne. George Milne was a noted golf-ball maker c1753 and Henry Miln was a club-maker who died in 1755. Although, St Andrews was always well known as a golf-ball manufacturing centre, club making appears to have been more sporadic until 1819 when Hugh Philp began supplying the Royal and Ancient Golf Club. Until then they had been paying Peter McEwan for over a decade to travel from Bruntsfield in Edinburgh.

The Development of the Old Course

By 1754, St Andrews consisted of twelve holes, ten of which were played twice, making a round of twenty-two holes in all. The course wends its way 'out' along the coast, and then turns back 'in' to the clubhouse. The instructions for playing the first competition there contained references to some of the Old Course holes which are still in existence. The last winner over this configuration was William St Clair of Roslin, who then, as Captain, authorised changes to the layout.

The Captain and Gentlemen Golfers present are of opinion that it would be for the improvement of the Links that the four first holes should be converted into two, - They therefore have agreed that for the future they shall be played as two holes, in the same way as presently marked out.

In 1764, the 'Captain and Gentlemen Golfers present' of the club now known as the Royal and Ancient Golf Club of St Andrews decided the first four holes, which were also the last four holes, were too short and converted them into two holes to be played 'in the same way as presently marked out, thus creating an eighteen-hole golf course. It was actually ten holes, of which eight were played twice. William St Clair of Roslin, three times captain at St Andrews and four times captain at Leith.

Competing uses for the St Andrew's Links created friction between the golfers and others. The Town Council's financial difficulties resulted in the links being sold in 1799 to the commercial rabbit breeders Charles and Cathcart Dempster, but in 1805 the local inhabitants won the right to kill the rabbits. For sixteen years the 'Rabbit Wars' were waged over the links and in court, until, in 1821, James Cheape of Strathtyrum bought the links for the golfers and laid the foundations of St Andrews' golfing prosperity. 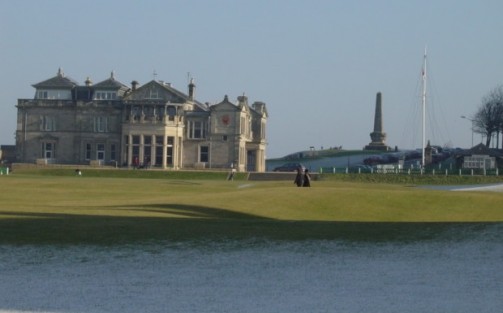 The present Royal and Ancient clubhouse was begun in 1854 and is seen in the picture with snow on the eighteenth hole. Golf was largely a winter game until the middle of the 19th Century, when mechanical grass cutters allowed play in the summer as well. With the increased prosperity of the Victorian times and the expansion of the railways, golf tourism took hold all over Britain.

By 1857, there were second holes on the middle greens and the course became the first 18-hole golf course in the world. Other courses soon followed.

In 1863, Old Tom Morris was appointed Custodier of the Links by the R&A. Old Tom was a St Andrew's man who had studied under another great St Andrew's golfer, Allan Robertson, before Tom had gone to Prestwick to be appointed Keeper of the Green there. Robertson died in 1859, and Old Tom returned to St Andrews to conduct extensive remodelling of the course as well as building others. Many people credit Old Tom with developing the manicured links that we see today. He also owned a shop and workshop at 8 The Links, which still exists.

James Cheape subsequently sold the Links in 1893 to the Royal and Ancient Club, who bid £5000, which was £500 more than the Town Council. However, the Council successfully petitioned Parliament to keep the Links in common ownership. Ultimately, after many Acts of Parliament, the Links were taken over by the Links Trust who run it today.

There are now other courses on the Links. The Royal and Ancient Golf Club built the New Course in 1895, designed by Old Tom Morris as well as the Jubilee course, which was opened with 12 holes in 1897 and named in honour of Queen Victoria's Diamond Jubilee that took place that year. It was extended to 18 holes in 1905. The Eden Course was opened in 1914 and the Strathtyrum in 1993. The nine-hole Balgrove course, designed for beginners and children, was first created in 1972, but substantially remodelled in 1993, when the Strathtyrum was completed. The latter three courses are built largely on land purchased at various times from the Strathtyrum estate of the Cheape family.

All six public Links courses, including the Old Course, are owned and operated by the St Andrews Links Trust. The Trust has two Links Clubhouses, open to the public, and strives to make it easy as possible for visitors to play when they want.

Apart from the clubhouse for the Royal and Ancient, there are clubhouses overlooking the links for The St Andrews Golf Club (1843) and The New Golf Club St Andrews (1902) for men and the St Rule Club (1896) and St Regulus Ladies Golf Club (1913) for women.