While Perth boasts the first royal golfer in King James IV, the distinguished history of golf at Carnoustie begins with the record of the first commoner golfer Sir Robert Maule (1493-1560) playing on Barry Links nearby. Sir Robert was said to be tall, fresh faced and well-spoken, but prone to anger and pugnacious. Although he never learned to read and write, he became Sheriff of Angus.

There is a reference in the Registrum of Panmure in 1560, in the obituary of Sir Robert Maule that he liked hawking and hunting.

"Lykewakes he exercisit the gowf, and ofttimes past to Barry Links, quhan the wadsie was for drink.... This was the zeir of God 1527, or thear abouts".

It is said that when Sir Robert lost at golf, he would send his servant into the pub to buy everyone a drink, thereby initiating the tradition that the loser buys the drinks. From 1547-1549, he a prisoner of the English and later in life became 'religious'. He died on 2nd May 1560 and is buried in Panbride Church, north-east of Carnoustie. 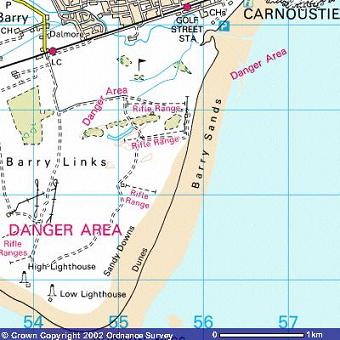 The mention of play on Barry Links is noteable as this is first definite reference to golf play on a links and therefore the first proof of golf proper being played, though it almost certainly had been previously.

Where Sir Robert played is anyone's guess. Most likely it was on land now covered by the town, as the coastline has moved significantly over the centuries. It may be on part of the area of today's play or further to the south-west. There is no way of knowing. The development of Carnoustie as a centre of golfing excellence did not happen until several centuries later.

In 1835, Robert Chambers, the Edinburgh publisher and golfer, was invited to Carnoustie by David Hunter, a local landowner, to advise on his private course on his Balskelly estate. David Hunter had been a member at Scotscraig, but when the course there was ploughed up in 1834, he needed a better course at Balskelly. The course was probably on ground used for the present-day Burnside course north of the Barry Burn (holes 1 to 5), as well the railway beside the Golf Street station and land further north. Chambers records seeing golf played there. What contribution Chambers made to the course is not certain. It is said that he was instrumental in getting it 'properly laid out'.  The Hunters of Blackness had owned Balskelly since mid-18th century and David Hunter's father, who was a golfer, inherited it in 1810. It is likely that there was a course on the estate decades before Chambers saw it. 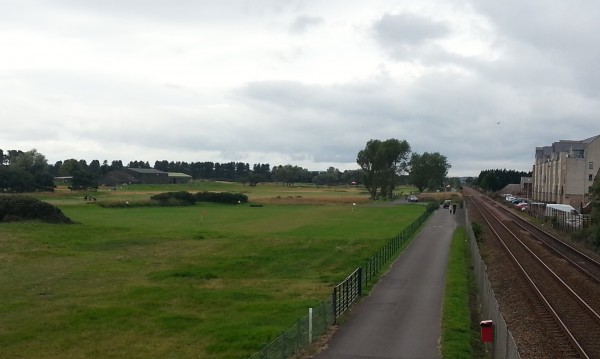 In the same year as Chamber's visit in 1835, Robert Miller, a caddy from St Andrews, moved to Carnoustie. He became the source of much of the current information about the development of golf in the area.

Unfortunately, the railway arrived in Carnoustie in 1838 and cut right through the Balskelly course, so the local golfers were in need of a new course. By this time, there was probably the 5 holes further east of Balskelly on newly reclaimed land. These 5 holes were played out and back, between the Beach Head Leisure Centre and the present second green of the Championship course. The first green was where Bruce's Court, once the Bruce Hotel was. The holes were short and the greens were used twice.

Allan Robertson from St Andrews, with the assistance of Tom Morris, is said to have been involved in designing these holes. Whether he was or not, he certainly returned in 1850 to upgrade them to 10 holes. These were usually played twice as a round of 20 holes.

The Carnoustie and Taymouth Golf Club, now the Carnoustie Golf Club, were probably playing as a group from 1839, though the formal inauguration of the club was not until 1842. They were joined in 1848 by the Caledonian Union club who were mostly Perth golfers, living in the area. In 1853, a series of land purchases secured the ground for golf, though it would not be until 1892 that the course came formally into public ownership. The Council were forced to act under threat that the army was going to acquire the land for training. There is still a shooting range at Barry. 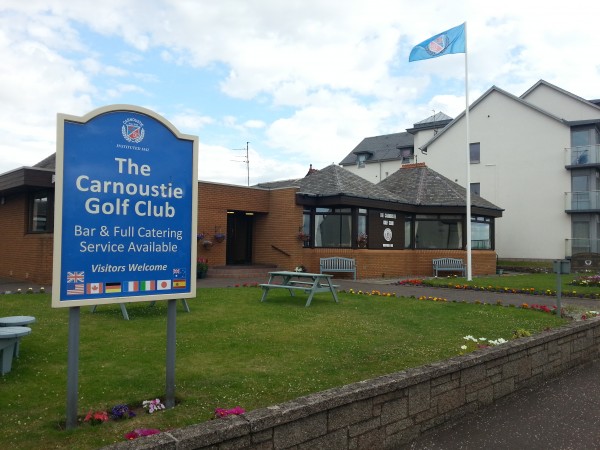 In the same year as the course was bought, Old Tom's older brother, George Morris, became its superintendent, though he resigned five years later to become tenant of the local Golf Inn on Park Avenue, recently redeveloped as a restaurant.

There was a professional tournament held at Carnoustie in 1867. It was won by Young Tom Morris, aged 16, with a score of 42 strokes in a final play-off round after three rounds of the 10-hole course.

Many histories report that the course was upgraded to 18 holes in 1867, but this seems to be a miscalculation, possibly based on a comment in the 1939 Carnoustie Commentary that Old Tom Morris extended the 10-hole course 'some 25 years' after Allan Robertson laid it out, assumed to be on the formation of the Carnoustie GC in 1842. Also, the Golfer's Year Book of 1866 says that Carnoustie had 18 holes, but this is because sometimes the ten holes were played twice, leaving out one hole, making a round of 18 holes.

In fact, it was the Dalhousie Golf Club, formed in 1868, who initiated a redesign by Old Tom Morris, which resulted in the opening of the 18-hole golf  in 1873, as reported in Bell's Life in London & Sporting Chronicle. The course of 4,565 yards, was then laid out by George Low, the assistant professional. This is the first course that we know had the standard white and red flags for the outward and inward nine holes. Previously, the holes on the Carnoustie course had been difficult to find, even if you were standing just yards from them. 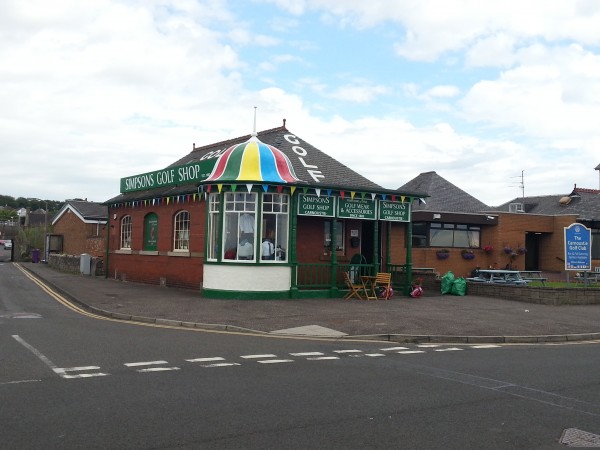 A major milestone in the history of Carnoustie was the arrival of Simpson family in 1883, when Bob Simpson was appointed clubmaker and superintendent of the course. The Simpson's golf shop is still there, selling souvenirs.

Given the fact that the first known golfer at Carnoustie was a 'commoner', it is fitting that the area later became known for its professional golfers. Between 1898 and 1930, it is said that over 150 professional club posts in North America were held by Carnoustie expatriates. Some put this figure higher.

Carnoustie also boasts the oldest independent women's golf club, the Carnoustie Ladies' Golf Club, established in August 1873 for the benefit of the wives of the members of the Dalhousie Golf Club, founded in 1868.

Also to be found there are the Carnoustie Caledonia (1886), Carnoustie Mercantile (1896) and New Taymouth (1906). More details of their histories can be found on their websites.