The list contains the 18 oldest surviving golf clubs in Scotland, including successor clubs, which have a 'home' course. The successor club is one which demonstrably inherited the activities, assets or location of the original club. Only nine of these 18 clubs have had a continuous existence. For the sake of completeness, six other contemporaneous clubs, with a connection to an existing club or course, are also shown. 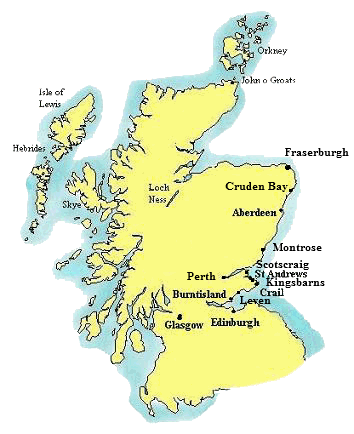 The dates are assessed from a consideration of all the evidence and not just documentation. With later clubs, it is clear that the 'foundation' date is the first meeting date, but, for most of the Scottish 18th century societies, these groups had been meeting for several years before the formality of the organisation began, usually with an 'event'.  To begin with the social activities of wining, dining and betting were as important as the golf. The social 'club' as a concept had been around since 1620 and social clubs themselves since 1640 or so, while the term and meaning of 'golf club' or 'golf society' had yet to enter conscious thinking. These golfers were simply groups meeting and playing golf, and it is only with hindsight that we ascribe to these activities the label of 'golf club'.

Leith Thistle no longer exists and Old Manchester do not own a course. Royal Blackheath is in south east London, England and Savannah Golf Club is in Georgia, USA. These four are not shown.

Eighteen golf clubs can trace their origins to the 18th Century.  Of these, six or seven have an effectively unbroken and continuous existence. Three at least were in abeyance for many years before being revived, though this was as a continuation of the original club, and eight clubs with an 18th century past were effectively restarted, as noted. (There is also a newspaper report of a Golf Club at Bray in Ireland in 1762.)   More details of these and other later clubs are shown in Scottish Golf Club Websites or Rest of World Golf Club Websites.

Charles B Clapcott, the early 20th century historian of golf, who 'discovered' the first rules of golf in 1937, spent some time considering the relevant claims of early golf clubs to their ‘foundation’ dates. His view of the oldest five clubs’ history is discussed in the article On the Dating of Golf Societies.