The first mention of the Kingsbarns Golf Club is actually in the minutes of the nearby Crail Golfing Society. On 4th September 1793, Crail agreed

“that members of the Kingsbarns Golfing Society be allowed to appear on the links at Crail in the uniform belonging to their own society, Blue Jackets."

The mention of the blue jackets shows an organised club was in existence at Kingsbarns, but the fact they were asking to play at Crail may mean that they had no course of their own yet.

The official formation date of the club is 1815. This is based on a reference in the Fife and Kinross Almanac, which also mentions that there were 40 members, with another 40 honorary members. This may be when they acquired the use of a course from the Earl Thomas, ninth Earl of Kellie who owned the Cambo Estate. He also arranged accommodation for them in the village hall for their quarterly meetings. In gratitude for his generosity, the members presented the Earl with the Erskine Cup in 1826. 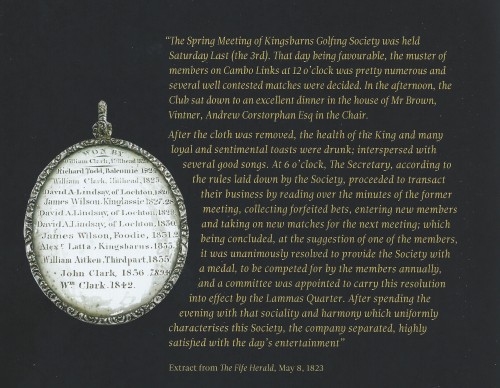 Certainly, from the report in the Fife Herald on 8th May 1823, they were playing over the Cambo Links for a silver medal, which has 17 winners listed until 1842, as seen in the picture.

Another other early Kingsbarns medal bears the motto "Palmam qui meriut ferat". This should be “Palmam qui meruit ferat” meaning, "Let he who won the palm (laurel wreath) wear it” and which was the motto of Lord Horatio Nelson, recent victor of naval victories during the Napoleonic Wars, and a common motto for clubs of the day.

The Club's first minutes date from 1835. In the Crail minutes, there is a record of a home and home match with Kingsbarns on 27th November 1839, though the result was not recorded.

Kingsbarns met four times a year. In May they played for the Batchelor Medal; in August for the Silver Medal; and in November for the Fielden Medal, which was also open to members of a select number of other golf clubs in Fife.

The Kingsbarns' minutes give the results for the Batchelor medal in 1840 and the Fielden medal from 1841, of which the first winner was Mr. Robert Haig.  He was the grandfather of Field-Marshal Earl Haig, famous soldier and Captain of the Royal and Ancient Golf Club in 1920.

However, in 1844, the tenant farmer of the land ploughed up the course. The club went into abeyance until 1922, when, at the urging of another local dignitary, the club reformed on a nine-hole course designed by Willie Auchterlonie. Sadly, in 1939, the land was again returned to farming to aid the war effort. Though there was a brief resumption afterwards, it did not last and play transferred to Balcomie.

The Kingsbarns GC has recently been revived with a limited membership of 50 who play on the newly reconstituted Kingsbarns Links.