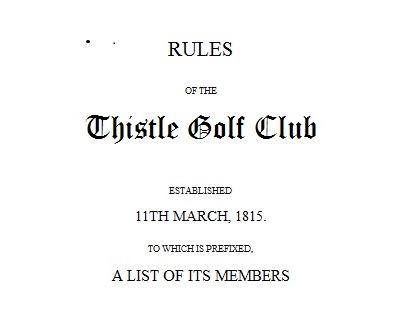 Its most important accomplishment was its rule book, published in 1824. It had an extensive introduction on golf history, the first known, which they termed ‘some historical notices relative to the progress of the game of golf in Scotland.’ Significantly the history documents the origins of ball games, and points out that the leather bound ball, known as the 'featherie', was very important in the development of golf.

The Thistle Club motto was “Noli me Tangere!” translated as ‘Touch me not!’ but more properly interpreted as ‘Do not hold me back!’ There is a biblical origin to this motto, on which several paintings by famous artists have been based. 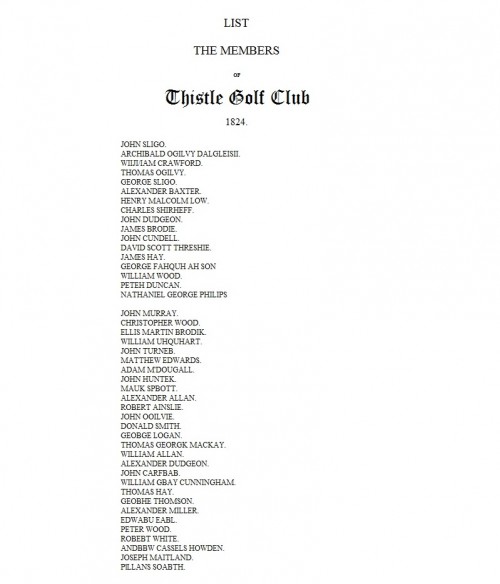 The principal reason for the Club's demise in 1833 was the sale of the 'golf house' by the Leith Golfers club (now the Honourable Company of Edinburgh Golfers) to pay their debts. At this point the Hon Co moved to Musselburgh, but the Thistle members seem to have each gone their own way.

The list of Thistle members of 1824 was published with the Rules. One of the members was George Sligo, who was a merchant in Leith and also a member of the East Lothian and Caledonian Horticultural Societies. When Leith Thistle folded he became a member of the North Berwick Golf Club and later its Captain in 1839. He was probably not the only member to make such a move.

Revival of the Club

For whatever reason, in 1866 there was sufficient interest for a revival of the Thistle. The Golfer's Yearbook of 1866 reported of the Thistle Club that: -

This Club was established in 1815, and was in active operation for 15 years up to 1830. After having been in abeyance for 36 years, it was resuscitated on 5th April, 1866. The members have a commodious Club-room, and the game has made great progress since Spring; the resident professional being Willie Dunn, whose services the Club was fortunate enough, to secure.

In 1866, the membership included Robert Chambers, a prominent golfer.  He was a member of the Bruntsfield Links Golfing Society and other clubs. He was later Captain of Tantallon Golf Club  at North Berwick and, in 1858, Chambers was the winner of the first individual 'Grand National' golfing tournament in St Andrews. Chambers laid out the first 9-hole course at Hoylake with George Morris and he, or his father, was instrumental in the initial development of the course at Carnoustie.

The Thistle had gold and silver medals played for over 3 rounds of the 7-hole course at Leith. 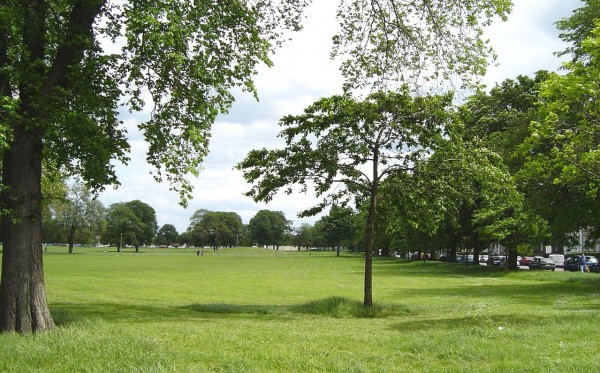 The Leith Thistle was still listed in the golfing annuals and postal directories in 1888. Leith was getting congested and problematic, but the club struggled on there until the end of the century, using 8 Vanbrugh Place as its club-house, where William Dunn, the golf club-maker, worked. Thereafter, the Thistle disappear. 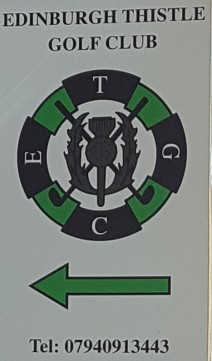 Soon after their formal inauguration, some of the Thistle members began playing on Bruntsfield Links in the 1820s. This may have been because it was more convenient for those who lived in Edinburgh. In 1870, when they got the opportunity to rent space in the Golf House Tavern, the Edinburgh Thistle Golf Club was formally created. Twenty years later, Edinburgh Thistle was one of the founding clubs at the opening of the Braid Hills course. The club still play there today and their clubhouse is on the first floor above the new starter's office. They are effectively the successor club to the Leith Thistle.

James Braid, who was born in Elie and was a member of the Earlsferry Thistle club, became a prominent member of Edinburgh Thistle. He won the Open five times between 1901 and 1910, but prior to this, he won several club medals and the Braids Tournament in 1892, which he personally considered the finest win of his amateur career. Tommy Armour, who won the US Open in 1927 and the Open in 1931, was also an Edinburgh Thistle club member. 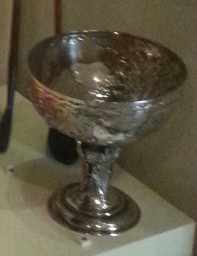 At some point, the Leith Thistle Club memorabilia were disposed of. One of their trophies, a bowl, can be seen in the National Museum of Scotland. Recently, Thistle Club scorecards from 1825 were discovered and are available in occasional auctions.

The club name is also kept alive in the USA, by the Thistle Golf Club in North Carolina. This is a commercial development of Thistle Estates.

The North Carolina club is 110 miles north from Charleston, South Carolina, site of the first mention of golf in America, when golf clubs and balls were imported in 1739 and 1743. For more details of the oldest clubs and courses in America, see New World: Oldest Clubs and Courses.

The Carolina club ‘exhibits many of the relic trophy clubs and score cards from the time period, as well as the original book, Rules of the Thistle Golf Club, published in 1824’. Other clubs also have copies of this important work including Bruntsfield Links Golfing Society in Edinburgh and Royal Blackheath Golf Club in London.