It has long been known that the golfing ground at Earlsferry is among the oldest in the world, but it only recently became certain that formal golf club activity there goes back to the 18th century.

Nowadays the area is better known as Elie, but the first golf club formed was Earlsferry Golf Society which can be traced to 1787, though it was apparently forgotten when later clubs such as the Earlsferry Abbey Golfing Society and the Earlsferry and Elie Golf Club were instituted in 1831 and 1858 respectively.

No other details are known about the original club, apart from a newspaper notice 'discovered' in 2015. It appeared in the Caledonian Mercury on 26th April 1787 calling all the members to a dinner on Tuesday 1st May 1787 at 3pm prompt, by order of the Captain. The use of the Edinburgh paper and the wording implies a sizeable membership of well-to-do individuals.

It is signed by P Plenderleath as Secretary. This is almost certainly Patrick Plenderleath (1750-1798), a Writer (solicitor) who lived in Pittenweem, a few miles up the coast. He was married to Isabel Bayne and they had two sons William (1779) and Andrew (1785), though Andrew died aged 11 months.

The identity of the Earlsferry club Captain is not known, but Patrick was the son of Benjamin Plenderleath, who was the Factor for Sir John Anstruther of that Ilk. This is Sir John Anstruther of Anstruther (1718-99), a local worthy who lived in Elie House and who would be a candidate for the job. In the next century, another branch of the Anstruther family were prominent golfers in Fife and London, and one of them, Sir Ralph Anstruther, became Captain of a successor Elie club in 1838. 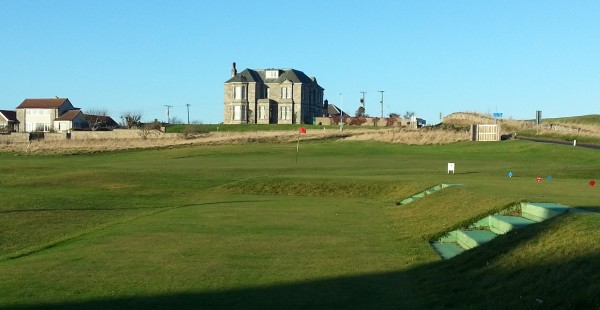 The club, per se, did not endure, possibly because in 1812 the tenant of the land they used ploughed it up and it took 20 years of legal wrangling to get a permanent solution. However, other factors such as the wars in Europe may have played a part and several of the early golf clubs went into abeyance during the early 19th century.

During the various court hearings for the above case, there was evidence given of extensive play on the links in the last quarter of the 18th century, but none about any club activities or competitions. The witnesses describe a semi-permanent course of varying length.

In 1832, the concluding legal judgement was implemented that gave the golfers the right to use a tract of land on the links, which was progressively increased over the next century to be the course seen today.

The anticipation of this settlement stimulated a golf revival and on 7th May 1831 the first annual meeting of a phoenix golf club, the Earlsferry Abbey Golf Society, was held at which the silver medal was played for over Earlsferry Links and won by George Wood of Colinsburgh.  By August 1831, the Fife Herald reported that

The Club is now numerous and respectable; and it is truly gratifying to see our ancient golfing green, lately lonely and deserted, covered with golfers in their scarlet jackets, keenly engaged in this health-producing sport.

At the anniversary meeting in 1832, the medal was won by John Swayne of Elie. The Abbey club were soon not the only group of golfers in the area, as there was a 'gymnastic' club founded in 1835, based at Colinsburgh, playing on the Dunbarnie Links (sic). This area is now called the Dumbarnie Links nature reserve and it is just to the north-west of Earlsferry Links. According to a contemporary newspaper report, the Elie golfers merged with them in 1837 to become the East of Fife Gymnastic Club, playing twice a year at Dunbarnie and once a year at Earlsferry.

The Dunbarnie golfers were top people. The club had 47 members comprising 'almost all the landed proprietors in the neighbourhood'. They built a clubhouse, courtesy of the 1837 Captain, Mr Charles Halkett Craigie and dined in Mrs Ronald's Inn in Colinsburgh. Charles Craigie was a former winner of the silver club at St Andrews in 1832 and thus a former captain of the Royal & Ancient, as was his successor Dunbarnie captain, Sir Ralph Anstruther of Balcaskie, who had been captain of the R&A in 1825.

At some point in the coming years, they changed the club name into the Hercules Golf Club, as this is how they are reported in the Golfers Manual 1857 (though this reports the date of the merger with the 'Golf Club at Elie' as 1846).  As before, this club too bit the dust for reasons unknown but presumed to be declining support as well as possibly the lack of availability of the Dunbarnie Links.

Whatever fate had befallen the Dunbarnie golfers, a third Earlsferry club, the Earlsferry and Elie Golf Club, was formed in 1858, supplanting the previous clubs and playing over the Earlsferry course. For many years, the club did not have a club-house, but made use of George Forrester's shed. He was one of three club-makers at Elie whose sheds were located in today's car park. For their annual meetings they used the Earlsferry Town Hall and for hospitality they used the Golfer's Tavern, now The 19th Hole, 5 Links Road. 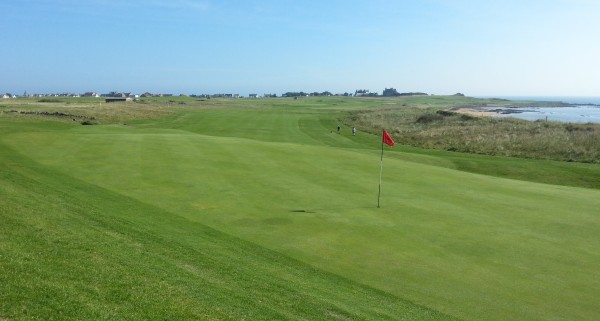 The minutes show that the council meetings were largely occupied with arranging competitions and setting 'odds' in matches between members. These matches were often advertised in the local press. Most matters were routine and common to all golf clubs, such as in 1870 when the Council had to remined members not to remove sand from holes to make tees. They bought iron bands for holes in 1874 to mitigate this problem and a lawnmower in 1877, quite some expense. However the Club's income was a modest £28 per year and it seems these arrangements did not suit all, as there were some who wanted to undertake more substantial developments.

So it was that in 1873, four of the club members leased land to the west of the course to extend it and build a clubhouse. To facilitate raising the necessary funds, they formed a separate club to achieve their objectives. Thus the Golf House Club was established in May 1875 and the present club called the "Golf House Club, Elie" takes its name from the golf house completed in 1877 for £1,000. This was paid for by issuing shares of £5, which entitled the holder to the annual club subscription at half price. The first captain of the new club was William Baird and it operated separately from Earlsferry and Elie Golf Club for many years. 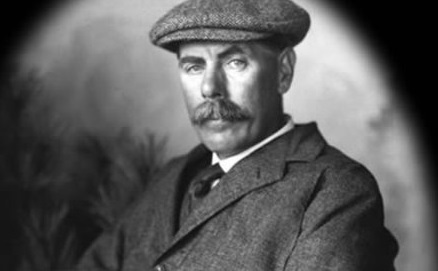 In the same year as the Golf House Club was formed, the Earlsferry Thistle Golf Club began. This was primarily an artisan club which continues to this day. It has a limited membership and a separate club-house overlooking the links.

One of its early members was James Braid, born in Earlsferry in 1870, who joined the Thistle when he was fifeteen. Braid would later describe the 13th hole of his home course as the 'best hole in golf' (see picture above).

In 1884 a ladies club, the Elie and Earlsferry Ladies Golf Club was formed which exists today as a separate section of the Golf House Club with its own space within the club-house. Earlsferry Thistle also has a ladies section.

The Earlsferry and Elie Golf Club 'disbanded' in 1912, leaving the Golf House Club, Elie as the primary successor to the Earlsferry Golf Society of 1787.