Crail is the oldest Royal Burgh in Fife and has connections with the Low Countries which go back centuries.  The bell in the Dutch Tower in the Town Hall was cast in The Netherlands in 1520. It was an important and thriving port for many years in middle ages. Mary of Guise, the mother of Mary Queen of Scots, landed here in 1538 on the way to her marriage to James V at St Andrews the following day. Crail could well have been one of the first places in Scotland where golf was played.

Crail Golf Society was formally instituted on 23rd February 1786 with an inaugural meeting of eleven members.

Several gentlemen in and about the Town of Crail who were fond of the diversion of golf agreed to form themselves into a Society which should be known by the name of the Crail Golfing Society.

The early golf members included land owners, tenant farmers, naval officers, writers (solicitors), ship masters, bailies and the pub landlord. Three of these would be raised to the peerage in years to come. Possibly due to the presence of the pub landlord, they were definitely NOT 'teetotallers',  as this minute of 1789 conclusively shows:-

'no member, in particular the Secretary, shall absent himself from the bowl on the pretence of tea drinking.'

Crail is one of only three golf clubs from the 18th century to possess a complete series of minute books from its foundation date, though there are gaps in the entries.  As elsewhere, golf was probably played before the club was formed and the Gazetteer of Scotland of 1832 reports there was a club in Crail in 1760, though no records exist. With a port and sea connections to The Netherlands, early golf at Crail would be not unexpected. 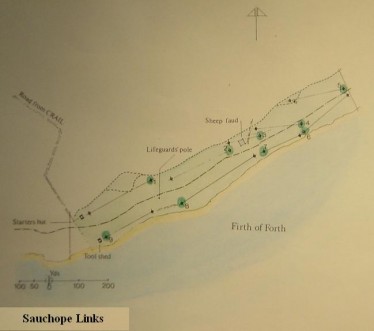 The original links were at Sauchope on the coast just north of Crail. The layout of the nine-hole course, which developed there, was five holes out on the landward side and four back along the coast. Sauchope is now a caravan park.

After matches, members would dine at an inn, now called the Golf Hotel,  whose landlord was a founding member, Mr Daniel Conolly.

In the early 19th Century, Crail went into decline. By 1813 there were only eight members, when the decision was taken to 'dissolve' the club, though it staggered on for a few years. There was a revival in 1824 for a decade or so and again in 1849. Matters were not helped by the local tenant farmer Mr Mackie who protested at the golf and physically harassed the golfers in 1837. When this failed, he even ploughed up part of the course, though he was made to re-instate it.

It was not really until the end of the century, that the club flourished again in the great boom of golfing which the new prosperity and the railways brought to many parts of Scotland. 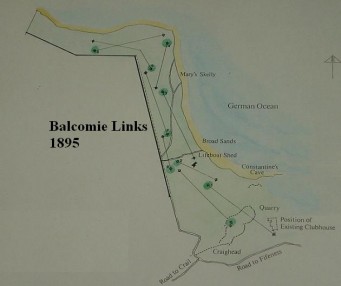 In 1895, the Crail club officially left Sauchope to play over the Balcomie Links. The members had been playing there previously from time to time, evidenced by a record of a society competition held at Balcomie in September 1857.

It is believed that Old Tom Morris, who was based at St Andrews, ten miles away, laid out nine holes at Balcomie in 1892 and returned later in 1896 to add another nine. Maps of the subsequent development of the course in 1900, 1904, 1994 and 1995 are on display in the Crail clubhouse, seen below, which has incomparable views over the North Sea.