Earlsferry and Elie are adjacent villages which merge into one. Though it is today referred to as the Elie course, the original course was more in Earlsferry than Elie. The first club formed was Earlsferry Golf Society which can be traced to 1787, although its existence was apparently forgotten by the time the Earlsferry and Elie Golf Club was formed in 1858.

There are reports of the game being played on ‘Earlsferry Mure’ from the 15th Century and a right to golf was included in the 1589 Burgh Charter, though the original document was lost in a fire. This is only 34 years after the similar rights mentioned in St Andrews charter and definitely suggests golf being played here as long as it has been anywhere in Scotland.

In a later Court case, there is testimony of a 'constant practice' of playing golf on the links 'in all directions' in the middle of the 18th century, which is taken to be the middle of the present golfing ground.  In around 1770, a Short Course and a Long Course are mentioned, though this is may not have been a permanent formal layout. Players could hit as they pleased and make holes as they wanted. This area is believed to be the middle of course on land now occupied by the 4th and 17th holes as well as the 5th tee and 8th green.

In 1812, Robert Carstairs, a tenant of the Grange estate ploughed up part of the course, in the area mentioned above. This initiated a legal action by the Burgh to assert the golfing rights, which took 20 years to finalise. Finally, in 1832, the legal judgement was implemented that the golfers were entitled to use a tract of land that was (reputedly) as wide as a golfer could hit a ball, marked today on the east by the Inch Stones, still visible on the 6th and 7th fairways, and seen in 1882 map below. 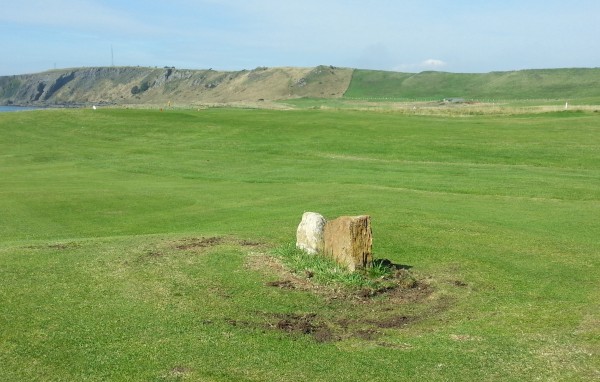 First the Earlsferry Abbey Golfing Club (1831-1837) played the course, and then the Earlsferry and Elie Golf Club (1858-1912).  The former club merged with the golf club at Dunbarnie Links, possibly because the course at Earlsferry was still only half the width seen today. The later club restarted playing full time at Earlsferry but operated without the expense of a club-house, using one of the club-maker's sheds to keep their clubs and the Golfer's Tavern in Links Road for hospitality. The Golfer's Tavern is now called The 19th Hole, 5 Links Road. The 19th hole has two wall maps which detail the original playing area and extensions to the golf course.

In 1873, some of the club members purchased land on Melon Park to the west to extend the course and build a clubhouse. Thus the Golf House Club came into existence in May 1875 and takes its name from the golf house completed in 1877 for £1,000. It operated separately from the Earlsferry and Elie club, which eventually disbanded.

There was a second court case in 1878, when another local farmer, Mr Fraser, complained that the golfers were cutting his grass. The matter was more serious than this comical description suggests, as this deprived him of necessary pasturage for his animals. The case was eventually settled by the payment of £20 rent to Mr Fraser, which was the beginning of the establishment of ownership rights to the old golf area and not just golfing rights over it. 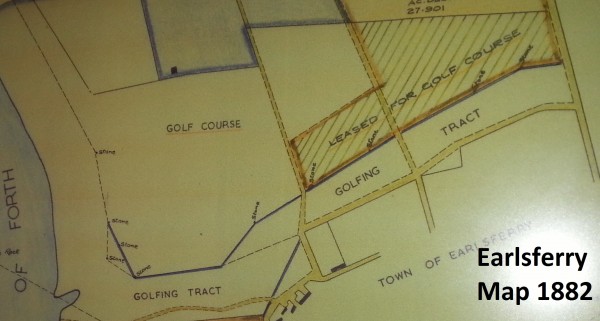 The original strip of land in 1832 was only half as wide as it is today. The acquisition of more land in 1886 enabled two fairways to be laid out side by side, where only one was possible before. At this point, 14 holes were laid out and when more land was acquired in 1896 an 18-hole course was created, said to be very close to the present day layout. 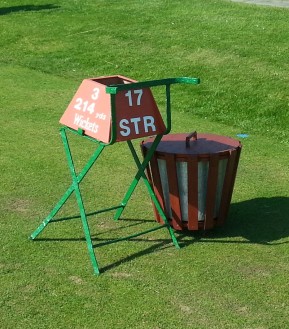 In 1974 The Golf House Club managed to purchase the land on which the course lies.

The Elie and Earlsferry Ladies Golf Club, founded in 1884, is still an active and separate section of the club and enjoys its own space within the clubhouse.

Earlsferry Thistle Golf Club was formed in 1875, the same year as the Golf House Club. It has a limited membership and a separate club-house overlooking the links.

Elie shares an unusual connection with the Brunstfield Links GS of having the same century old sandboxes still in use on the tees, though in Elie's case the boxes are painted red and the legs green.

One unique feature of the course is the real Royal Navy periscope above the starter's box, seen in the picture above and used to check that the first fairway is clear for the blind drive. It was acquired in 1966 when the experimental submarine HMS Excalibur was scrapped.

Elie and Earlsferry clubhouse with periscope on first tee