The great grandson of Captain John Chiene says that the Captain brought clubs from St Andrews and played on the West Links at the beginning of the 19th century. Captain Chiene, became a captain in 1813 during the Napoleonic Wars. He retired to become tenant of Williamstone Farm in North Berwick, where he died in 1848. He is buried at St Andrew's.

North Berwick Golf Club began life with some style at noon exactly on 4th June 1832 when the Captain, Sir David Baird of Newbyth, tee’d off to play over the 6 holes on the west links which stretched to the wall at today’s 3rd/16th holes. Sir David was a descendant of Sir John Baird, renowned player on the East Links in 1672. After play, the members dined at the Dalrymple Arms with champagne provide by Sir David. Until they merged with New Club in 1963, the North Berwick Golf Club, technically, never owed a clubhouse, though they did set up tents on the links, from which ‘relief’ could be obtained. The Dalrymple Arms is now Zitto's restaurant.

The other nine members of the North Berwick GC were mostly landed gentry, members of the St Andrews or Leith golfers. They included JO Fairlie who would play a prominent role in the foundation of Prestwick and the national competition there which became 'The Open'.

The Statistical Account of 1839, stated 'the prevailing popular game of the parish is golf for which the western links are peculiarly well adapted.’ 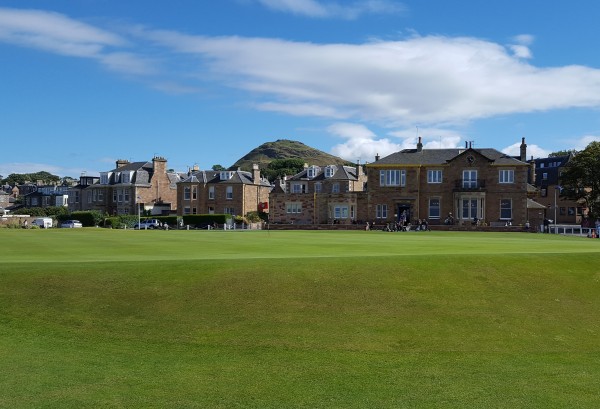 Other clubs at North Berwick include the Tantallon Golf Club, founded in 1853; the Bass Rock Golf Club, founded in 1873 and the New Club founded in 1879. All of these made substantial contributions to golf in the area, especially as few of the North Berwick Golf Club members were local. Tantallon provided rules to other clubs and organised the maintenance of the links. The Bass Rock was a prominent artisan club and the New Club, instituted by members of North Berwick GC, built the present clubhouse on the 18th green in 1880. The clubhouse of the Tantallon Club is situated behind it.

John Gourlay, the feathery ball maker from Bruntsfield and Musselburgh, was often invited to be present at the North Berwick golf meetings. In 1876, a greens committee was formed, though eventually the New Club took over the lease of the links.

A year after the formation of the greens committee, in 1877, the West Links were extended to 18 holes with land provided by the Rt. Hon. John Nisbet-Hamilton,  owner of the Archerfield Estate. He was a keen golfer and built a course in his estate in 1869 as well as providing land for a ladies course in 1867. 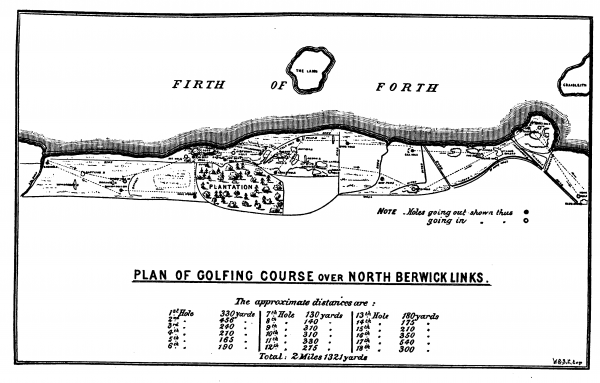 A Ladies' golf club itself was not formed until 1888. They operated their own lease and had their own clubhouse and greenkeeping staff, but from 1935 they played the West Links and recently integrated into the North Berwick Golf Club. The ladies course is now the Children's Course and is the oldest 'Ladies course' in the world. The course is run by North Berwick Golf Club. Three holes are situated in front of the Marine Hotel, beside the 16th fairway. The other six holes are beside the hotel and can be seen here as well as in the picture below.

Gambling was always a part of golf and this is very true of North Berwick where, as reported by Rev John Kerr in 1896, the club ran a sweepstake instead of giving prizes for handicap competitions. The entrance money was 2 sovereigns (2 pounds, 2 shillings) with 10 sovereigns added by the club, which, given a reported field of 18 members, would total more than £50, an enormous amount for that time.

In 1963, the North Berwick Golf Club formally merged into the New Club whose clubhouse they use to this day.