Part I of Oldest 19th Hole covered the club-house buildings of the Royal Musselburgh, Royal Blackheath, and Glasgow golf clubs, whose clubhouse buildings are of historic interest in their own right.  The club-houses of the other old clubs are covered below in order of the date of the oldest extant club-house at the location.

The golf club concept and operation took over a century to develop. Club-house facilities were not initially an essential part of their thinking. What was important was wining and dining afterwards, mostly in local hostelries, of which the notable extant pubs are covered here in Part II Oldest 19th Hole Golf Pubs, Inns and Taverns.

Almost all the old golf societies' club-houses date from the middle to the end of the 19th century. Most look like private houses, not just because everything was built as a house in those days but also to make them easy to sell if the club failed. The significant investment of a club-house frequently resulted in heated discussions, especially in artisan clubs. In several clubs, a 'new' separate club had to be formed of those willing to contribute to a clubhouse. For this reason, some successor clubs now owe their existence, and even their name, to the provision of the club-house facility. So their history is more interesting than just a list of buildings and dates.

The longest serving golf club-house building in the world is the Golf Tavern at Bruntsfield Links.  It has been in continuous use as a club-house since Jan 1852, used by several clubs including Bruntsfield Links GS, Bruntsfield Allied GC, Edinburgh Thistle and Bruntsfield Short Hole GC. It was never owned by any of them. The Golf Tavern is the overlapping successor to Golfhall, where club golf began.  Golfhall, under various names, had been a golf club-house continuously since July 1760 until Sept 1905. These clubhouses are now the subject of a new history published in 2017. 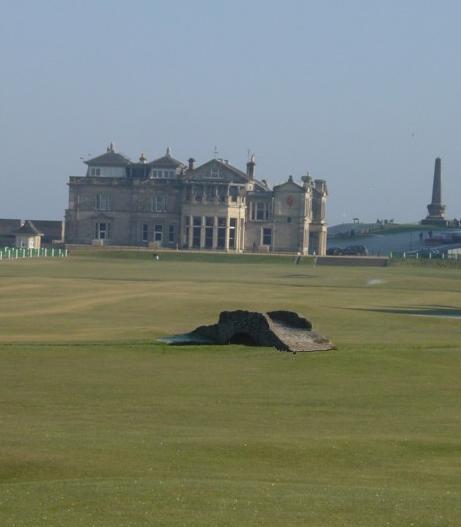 The Royal & Ancient Golf Club of St Andrews didn't build their own club-house until 1854, exactly 100 years after they were formed. It is the oldest club-house in continuous use owned by a golf club. It has subsequently been significantly extended and developed.

For the two decades beforehand, they had used a building called the Union Parlour on Golf Place with other golfers. It is long since demolished.

The other golf clubs in St Andrews did not acquire their own club-houses until the beginning of the 20th century. The New Club (St Andrews) bought their's in Links Road for £1,300 in 1902. In fact, getting a club-house was the reason why they were formed. The building is sadly best known as the place where Old Tom Morris died in 1908 following a tragic accidental fall. 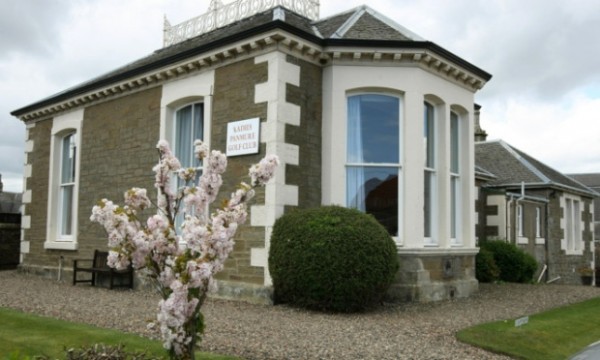 Monifieth has a beautiful row of club-houses, all facing the links and recently modernised. They were built on land from the Panmure Hotel between 1903-07. Before these were built, there were two others. The first was a club-house constructed by the railway near the station, which is now gone.

The second still exists. It was built in 1871 by the Panmure Golf Club, Monifieth's first golf club, in Princes Street, behind the other club-houses and it is now used by the Ladies Panmure Golf Club. The Ladies club was not founded until 1893 but they inherited the old club-house when the Panmure club went north to create a new course at Barry in 1899.  This is the third oldest extant golf club-house found so far after The Golf Tavern and the R&A club-house.

Because of falling membership,  the other three clubs in Monifieth are now discussing a club-house amalgamation. Which one(s) will be left is not yet known. 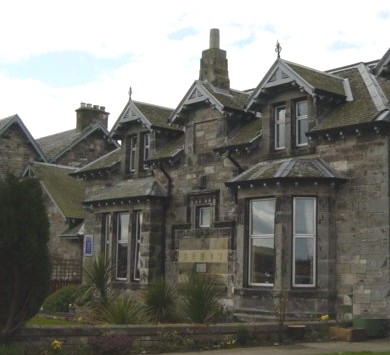 Apart from the Royal Musselburgh club, who began there, the Honourable Company of Edinburgh Golfers, the Royal Burgess and the Bruntsfield Links clubs all built club-houses at Musselburgh.

The club-houses of the Royal Musselburgh, Hon Company and Bruntsfield Links have now found other uses outlined here.

The Burgess club-house is still in use as golf club-house. It was built in 1875 at the top of Links Place, now Balcarres Road. After the Burgess left in 1895, it became a café and later a dental practice. In 1993 the Musselburgh Old Course Golf Club purchased it and have been there ever since. So its has been a golf club-house for about 45 years out of the 140 years of its existence. It still has 18 years to go to match the length of use as a golf club-house of the Honourable Company's.

The present club-house of the Royal Perth Golfing Society was purchased in 1875, prior to which they used various addresses in the town including the House on the Green at 3 Waterside, which dates back to 1788 and is now converted into flats.

The Golf Club-House Club at Elie completed the first part of their present clubhouse in 1877.  Elie is one of those places where there was a club formed specially to build a club-house. Hence the rather unusual club name. The club members had previously used the golf club-makers' sheds in the car park to store their clubs and the Golfers Tavern on Links Road (now called the 19th Hole) for eating and drinking. Earlsferry is a very old golf course and it is an odd-but-true fact that this is the oldest club-house, owned by the club that also owns its course. This is despite the fact that the club is the last man standing of half-a-dozen clubs formed here over the centuries.

The golfers at North Berwick initiated their first golf club with play on the west links 1832. They used marquees on competition days and the hospitality of the Dalrymple Arms 10 Quality Street, (now Zitto, an Italian wine bar.) The present club-house, which the North Berwick Golf Club acquired on merger with the New Club (North Berwick), dates to 1880. 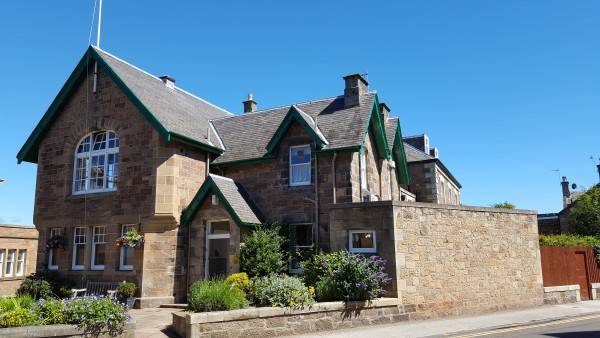 The Tantallon Golf Club also based here have their own club-house just behind North Berwick's. They used marquees on competition days as well. It was Robert Chambers, as Captain, who first suggested in 1884 that they should sell the club tent and get a club-house, but it was not until 1896 that they bought Point Garry Cottage, 32 Westgate, North Berwick.

In London, the club-house of the Royal Wimbledon Golf Club dates back to before the lease at their present location began. In 1880, they had been given notice to quit the Iron Hut that they had been using since 1871 and they got a temporary lease on Mrs Croft's Cottage nearby, where they built a new 'iron hut'. 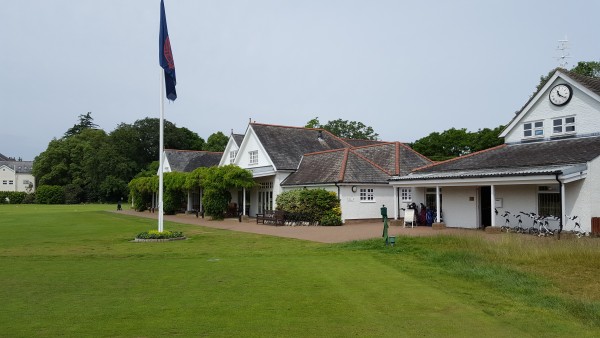 Wimbledon is one of the places where club-house problems shaped history, as it contributed to the schism which took place between the London Scottish and Royal Wimbledon.

The London Scottish began building their own club-house in 1897.

Aberdeen golf began further south than where it is played today. The Royal Aberdeen moved over the river to their present Balgownie course in 1888, leaving the other clubs playing the King's Links, about half a mile north of where golf first began. The early meeting places were the usual pubs - Masson's in Queen Street and later the Humphrey Hotel in Castle Street, now gone. The golfers kept their clubs at the club-maker's shop in Constitution Street, located on the way to the course. Some time later they built a club-house at the top of Constitution Street, whose location can be seen on the map here beside the 18th green.  It is now a house.

Although they were not the first club at Carnoustie the Dalhousie club built the first club-house in 1868 which was a magnificent feature on Links Parade. Sadly, the building was demolished in 1997 and the site is now occupied by four blocks of apartments.

The oldest extant club-house is Carnoustie Caledonia's. In 1889 they spent £600 to build the 'east-most' half of the present club-house. It was a lot of money for artisan club, so they designed it as a house to be able to sell it easily if the club fell into financial difficulties.  They need not have worried. The club prospered and three years last they spent another £600 building the other half. 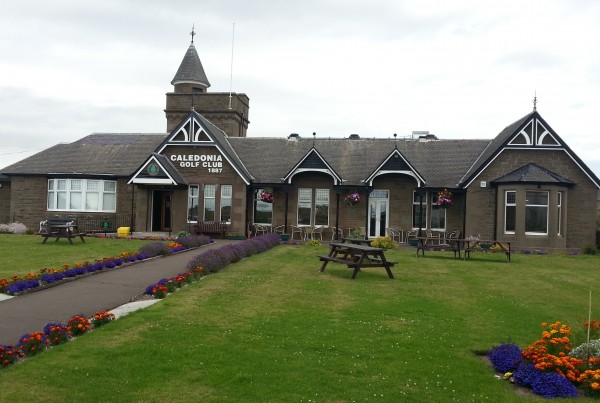 Carnoustie Ladies' present clubhouse was designed in 1895 and constructed at a cost of £510. The oldest club at Carnoustie is the Carnoustie Golf Club, but it was the last to start building a club-house in 1898. It has been considerably modernised to be present club-house on Links parade.

The old Innerleven club, now part of Leven, decided to move away from their Dubbieside course in 1868. To begin with they kept their clubs in the workshop of the local golf club-maker, Alex Patrick. They did not start the present club-house building until 1894. This was later taken over by the merged Leven golf clubs.

Although the course at Scotscraig dates to 1817, the club went into abeyance for many years and, when they reformed, they used the local 'fever' hospital as their club-house.  The present club-house only goes back to 1896.

The Dodhead course at Burntisland was not completed until 1898, and as at Elie and North Berwick there was a club formed specially to build the club-house, hence the name of the club, Burntisland Golf House Club. Unlike other places where this happened, the original Burntisland Golf Club still operates independently. In the early days, when the golfers played on the town links they would have used local pubs and one of these, The Star Pub at 73 High Street, dates to 17th century. The date of The Golf Tavern on Burntisland Links itself has not been ascertained (not to be confused with The Golf Tavern on Bruntsfield Links in Edinburgh.)

At Dunbar, the present club-house was a major investment for the club in 1902. Before that, they were the fortunate recipients of the largesse of the Duke and Duchess of Roxburghe who provided the first clubhouse in 1871. The building is now a private house just on the right at the entrance to the course.

Montrose is the only town with more golf club-houses that Musselburgh. There are eleven and you will need a map and a guide to find them all. Only three of them are in current use - Royal Montrose, Mercantile and Caledonia - and they are located close to each other at the first tee, with another four previous club-houses nearby. There are four others scattered throughout the town.

The oldest current club-house by a whisker is the Mercantile at 1904 from the Royal Montrose at 1906. The Caledonia (1975) is just round the corner and two previous club-houses are situated just to the south - Mercantile Golf Lodge (1891) and Victoria Roo's Leap (1895). Three of these can be seen in the picture. 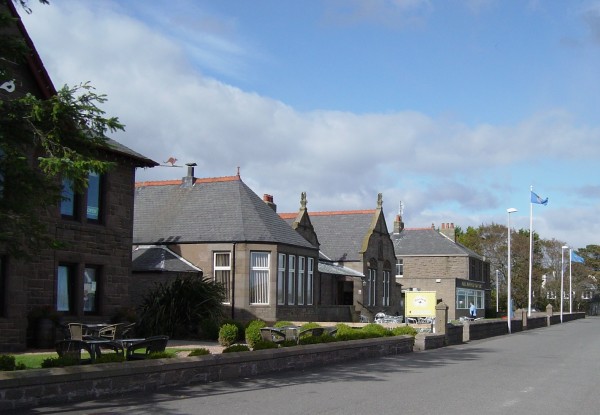 To begin with the Montrose golfers had used the Star Inn, which still exists as the Star Hotel in New Wynd off the High Street.  In 1866, the golfers rented Southfield House from the Council, before buying or building their own club-houses. Southfield became part of a private house, situated across Traill Drive from the Royal Montrose club-house and just seen in the picture above.

The old Caledonia golf house (1901) is just up Dorwood Road. To find the other former club-houses you need to go about half a mile south.

It is an irony that if the Gullane golfers had held on to their first Golf Tavern, now a house beside the visitors' car park, it would today be the oldest golf pub and club-house in the world. Instead of having the oldest, their present clubhouse is one of the youngest and only dates to 1929 when they redeveloped the site of the old Ladies club-house and land they owned to build a joint club-house. 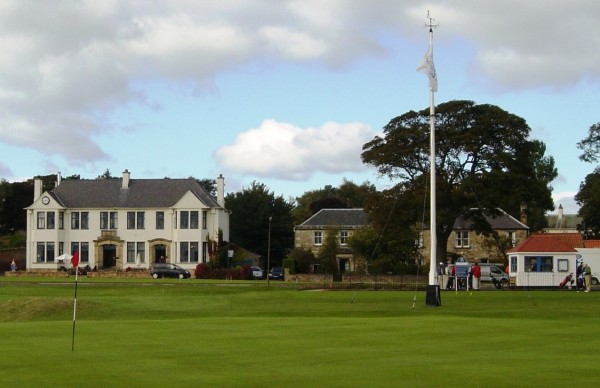 In between these two club-houses, they built the Old Clubhouse, which they used from 1890 to 1929.  It is now one of the best known and patronised golf pubs in the region.