Myth has it that Mary Stuart, Queen of Scots, (1542-1587), played golf at Musselburgh in 1567. This claim is derived from a charge that the Earl of Moray put before the Westminster Commissioners in the 'Articles' in 1568. He accused Mary of playing golf and mail at Seton House only a few days after the murder of her husband, Lord Darnley, in which he claimed she was implicated. The original Seton home, now destroyed, was 4 miles east of Musselburgh. Mail looked similar to putting or 'target' golf and it is possible that the witnesses did not know which game was being played.  Thus we cannot be sure what game Mary played or where.

There is definite evidence that Sir John Foulis of Ravelston, a prominent Edinburgh lawyer, who kept copious records of his golf on Leith Links, played golf at Musselburgh in 1672. He lost in a match with his friends Gosford and Lyon and others as his notebook records:

The Royal Musselburgh Golf Club dates to 1774 at least, as their Old Club Cup has winners listed back to that year. It is unlikely the course has moved since their inception or they would have noted it in the records. Consquently we can be sure the existing golfing ground dates back to this time.

Musselburgh is an important site in women's golf as the likely place where the fish wives played golf on the links. In the Statistical Account of Scotland 1791-9 Rev Carlyle observes:-

"As the do the work of men and their strength and activities is equal to their work, their amusements are also of the masculine kind. On holidays they frequently play at golf; and on Shrove Tuesday there is a standing match at football between the married and unmarried women at which the former are always the victors."

In November 1728, Duncan Forbes, President of the Court of Session and 'eminence grise' of the Leith golfers, played golf at Musselburgh with his son. He recorded the event with the regret that he wished his son were as good at anything else as he was at golf.

This Day after a Very hard Pull I Got the better
of My Son at the Gouf in Musselburgh Links, if he was as Good at any
Other thing as he is at that there might be some hopes for him.

The old links at Musselburgh was originally seven holes, with an eighth added in 1832 and final ninth in 1870, called the Sea Hole and now played as the fifth. In those days the course started at the old grandstand, and the first hole is what is now the second.

Musselburgh Medal Day with clubhouses and Arthur's Seat in background

One of the early mechanical devices for making standard sized golf holes was purchased by the (Royal) Musselburgh club in 1829 from local blacksmith Robert Gay for £1-0-0. (One pound exactly). This size was adopted as the standard size for a golf hole in 1893, though by that time Robert Gay's cutter had been replaced.

For forty years in the 19th century, four of the most important clubs in the world were playing at Musselburgh and all built clubhouses there. They formed a greens committee, paying according to the number of their members. (The average memberships in late 1880s are shown in brackets).

It was during this time that the Open was held at Musselburgh six times, four of which were won by Musselburgh men. These were the glory days of Musselburgh. 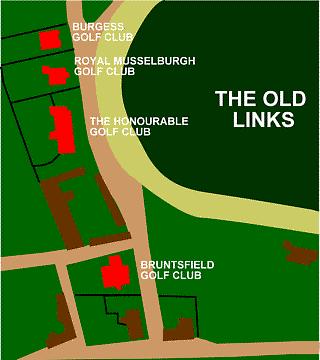 This map shows the relative location of the clubhouse buildings which still exist. 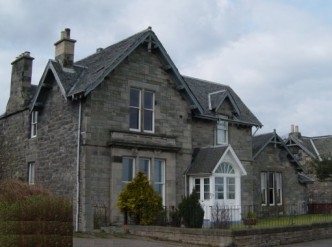 The Royal Musselburgh Golf Club (90 to 136 members) played at Musselburgh from about 1760 until 1925. They first used local pubs and later McEwan's workshop in Millhill and the race grandstand run by John Gourlay.  In 1873 they built 9 Links Place (now 9 Balcarres Road).

In 1908 the New Club merged into them and they used their clubhouse at No 8 (below) until 1925, at which time the Royal Musselburgh moved to their present site at Prestongrange House. 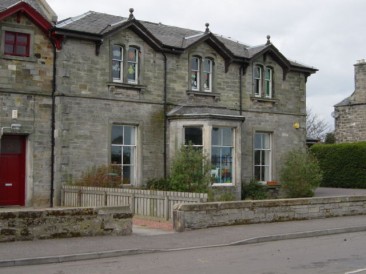 The Honourable Company of Edinburgh Golfers (400 members) played at Musselburgh from 1836 to 1891. To begin with, they used McKendrick's Inn 49 High Street as a base. (This later became the Musselburgh Arms and is now a Café.) They kept their clubs at McEwan's house in Millhill or in the race grandstand, where they also sometimes dined.

In 1865 they built a clubhouse at 8 Links Place (now 8 Balcarres Road), which is now a children's nursery.

After they left to go to Muirfield in 1891 further east, the New Club (of Musselburgh) took over the club-house. They merged with the Royal Musselbrugh Golf Club in 1908, who then began using the old Hon Co's club-house until they too decamped in 1925.

During this period they would have been supplied with golf balls by John Gourlay and with golf clubs by the McEwan and Park families, who were all based there. 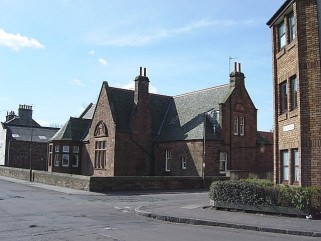 The Bruntsfield Links Golfing Society (130 members) began playing medals at Musselburgh from 1839.  They purchased the vacant St Peter's Episcopal Chapel in Millhill in 1872 and renovated it for use as their main clubhouse. Four years later they officially moved from Bruntsfield Links in the city centre to make Musselburgh Links their home course. (The church has since been demolished, and is now the site of a housing estate). They still retained their old facilities at Bruntsfield, now the Golf Tavern, for aged members who could not travel.

In 1886, BLGS built the club-house shown here in, only to depart twelve years later back west to Bartongate (Davidson's Mains). The Mill Hill building is now the Wiremill Social Club and has been extensively refurbished inside following a major fire over a decade ago. 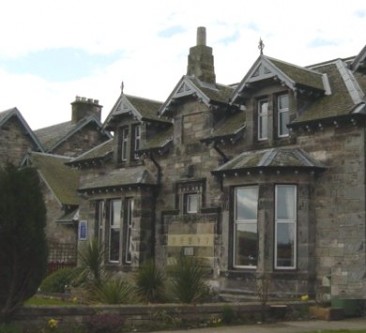 The (Royal) Burgess Golfing Society (100 members) opened a new clubhouse at 10 Links Place (now 10 Balcarres Road) in 1875 and moved back to Barnton in the west of Edinburgh in 1895. For a few years, they let the building to various tenants, including a café and later it became a dental practice, before the Musselburgh Old Course Golf Club purchased it in 1993.

In 1874, the 'Open' golf competition was held at Musselburgh, after the Honourable Company began sponsoring it with Prestwick and St Andrews clubs. It was held there five more times in 1877, 1880, 1883, 1886 and 1889. Four of the Opens at Musselburgh were won by Musselburgh men. The last of these was by Willie Park Jnr. He and the five other Musselburgh Open champions are honoured on a plaque on the former Burgess club-house.

Musselburgh Open Champions and dates - note that Mungo Park 1874 is in fact a depiction of Mungo Junior, when it should Mungo Senior.

A historical summary of the development of the Old Course has recently been made available on-line as part of a discussion on its future Musselburgh Old Course - An Open Venue is Reborn.