Until very recently the first recorded instance of golf outside Scotland was held to be at Greenwich/Blackheath in 1608, but this has now been superseded. 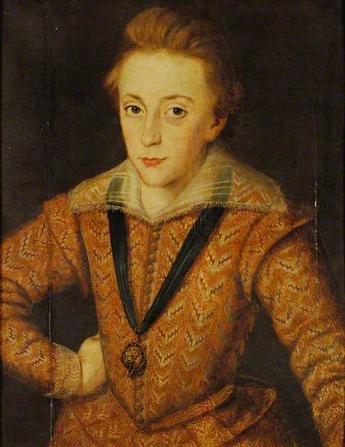 Frederick Henry, Prince of Wales 1594-1612, courtesy of Bodleian Museum Oxford, where Henry was a student 1605

In the autumn of 1606, the French Ambassador left London to avoid the bubonic plague that was raging there. He went to stay with Prince Henry, eldest son of King James VI/I, who was based at the old Tudor Richmond Palace. While there, the Ambassador wrote a letter, dated 31st October 1606, saying that Prince Henry liked playing tennis and at another Scottish game, very like jeu de maille, which is almost certainly golf. (1)

Frederick Henry, Prince of Wales, was born in 1594 and accompanied his father to London in 1603. He was a clever boy and very popular, but he died at 18, and never became King.

He was definitely a golfer like his father, as there records of purchases of golf balls and clubs in his accounts from c1610. So the French Ambassador's letter is not the only reference to his playing golf.

Henry was 'home' tutored by Adam Newton in London and later attended Magdalen College, Oxford.  It is recorded that, at some time during his education, Henry almost struck his tutor with a golf club.

Newton was sometimes severe in his chastisements; for when the prince was playing at goff, and having warned his tutor who was standing by in conversation that he was going to strike the ball, and having lifted up the goff-club, some one observing, “Beware, sir, that you hit not Mr. Newton!” the prince drew back the club, but smilingly observed, “Had I done so, I had but paid my debts.”

This anecdote was one of many recounted by a servant who had been with the Prince since he was three years old. These anecdotes were collected in a manuscript given to Henry. They were later published in 1817 by Isaac D'Israeli, in his third volume of Curiosities of Literature.  As the MS had been purchased for Henry in 1609, the anecdotes must relate to events that occurred between 1597 and 1608. Where the golf incident took place is not stated and it may have been at Richmond or elsewhere in London or at Oxford. It is likely to have been after he come from Scotland in 1603, when he was only nine and the quoted remark implies an educated mind. 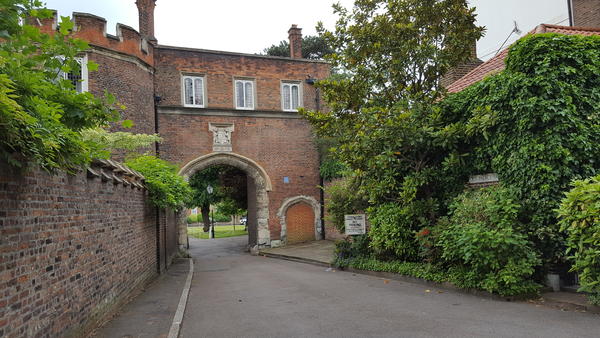 Entrance to Richmond Palace, one of few remains of the great Tudor edifice.

This makes Richmond the first recorded place where golf was played outside Scotland and Prince Henry the first known golfer in England.

Henry's younger brother, Charles, was also a golfer. Because Henry died young, Charles inherited the throne and later became embroiled in a war with the English Parliament, which he lost. Charles is reported as playing golf at Leith during the war and at Newcastle afterwards, in 1646, when he was a prisoner.

There are only remnants of Richmond Palace left, but there is still an extensive green beside where it stood. The nearest golf course and club is the Royal Mid-Surrey Golf Club, which is within walking distance.

Golf in England was sporadic until the end of the eighteenth century. There are references to golf at Royston in 1624, Newcastle in 1647 and elsewhere in London in 1655 and 1659, but the details are scant.

One hundred years later, in 1758, the Rev Carlyle describes playing on a golf course at Molesey Hurst (now Hurst Park), which is about four miles south-west of Richmond. This is the first definite course that we can locate in England. Shortly after this, the Blackheath golfers began their regular golfing competitions in south-east London, where they have been in continuous existence ever since.