I Princesses and Fishwives

The Princess and the Golf Ball

If the Victorian historians had written a history of women’s golf, they would have begun with the observation that girls in Ancient Sparta trained with the boys in sport and other matters until the age of 12.

If you think this is fanciful speculation, then you are not aware that what the 19th century golf historians actually said was that golf was invented by a woman of ancient Greece, or at least, the precursor of the golf ball was.

In the Rules of the Thistle Golf Club, the editors quote extensively from the 1810 book by Joseph Strutt called ‘The Sports and Pastimes of the People of England.’ In those days, golfers played with the ‘featherie’ ball, and this type of ball, made of stitched leather filled with feathers or flock, goes back to the ancient hand-ball games of royalty and royal princesses.

The first observation in the Thistle history is the claim that a woman from Corfu (Corcyra) called Anagalla invented the ball and taught Princess Nausica, daughter of the King of Phaeacia how to play handball with it.

" I. The ball has given origin to many popular
pastimes, and I have appropriated this chapter to
such of them as arc, or have been usually practised
in the fields, and other open places. The most ancient
amusement of this kind is distinguished with
us by the name of Hand-ball, and is, if Homer may
be accredited, coeval at least with the destruction
of Troy. Herodotus attributes the invention of the
ball to the Lydians ;' succeeding writers have affirmed,
that a female of distinction, named Anagalla,
a native of Corcyra, was the first who made
a ball for the purpose of pastime, which she pre-
sented to Nausica the daughter of Alcinous, King
of Phoenicia, and at the same time taught her how
to use it. This piece of history is partly derived
from Homer, who introduces the Princess of Corcyra,
with her maidens, amusing themselves at
hand-ball.

' O'er the green mead, the sporting virgins play,
Their shining veils unbound; along the skies,
Tost and rotost, the ball incessant flies.'

" Homer has restricted this pastime to the young
maidens of Corcyra, at least he has not mentioned
its being practised by the men. In times posterior
to the poet, the game of hand-ball was indiscriminately
played, by both sexes.”

The Rules of the Thistle Club were published in 1824, forty years before any woman’s golf club was founded. The Rules' editors comment that it is for the reader to decide from Strutt, ‘whether any of the various games at ball, in which the English at that period indulged, are to be classed with the game of Golf.’ Before coming to any firm conclusions, it should be noted that several of the characters mentioned in the extract above are mythical.

However, given the leather construction of the early golf balls, it is none-the-less equally likely that a woman could have invented it.

Sports such as athletics or wrestling, mostly exclusively male, have an obvious training function in a world of physical prowess and military leadership. Leisure sports such as handball, or its derivatives, tennis and golf, were the prerogative of people who had leisure, such as royal princesses. One can therefore see why they might be the original proponents of this type of game. 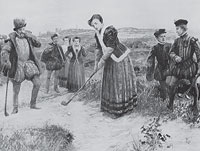 Mary, Queen of Scots, was accused by her enemies of playing maile and golf at Seton House in 1567, only a few days after the murder of her husband, Lord Darnley, in which they said she was implicated. Mary was tall and athletic and went riding and hunting. She practised archery and tennis, which women usually played with the assistance of a servant. Mary is reported to have once played tennis at Falkirk in men's breeches, which was outrageous for the day, but shows that, if she had wanted to play golf, she would have found a way, despite the restrictions of heavy dresses that women wore.

We do not know what type of golf Mary Stuart played. As she was also accused of playing maile (pall mall), the witnesses may have confused it with this game, or it may have been putting. The decorative Victorian portrayals of her striding over the links on her way to the green, after a 200 yard drive, are an undoubted fantasy.

Tradition has it that Mary Queen of Scots once lost a golf match to her lady in waiting, Mary Seton, whose family home was Seton House, and afterwards the Queen presented Mary Seton with a necklace as a reward. It was sold at Christie's in February 1894 for £365, which would now be a substantial amount. If this is true, under today’s amateur rules, this would make Mary Seton the world’s first professional golfer. It should, however, be noted that this story first appeared when the necklace was being sold.

There is an often quoted reference to royal golf in the English court in 1513, when Queen Catherine of Aragon, first wife of Henry VIII (Divorced), wrote a letter to Cardinal Wolsey, in which she appears to refer to 'golf', and that is certainly what the word appears to be to modern eyes.  Expert interpreters of her writing and the calligraphy of the day, are adamant that the word is 'Scotts'! Lettering, spelling and writing have changed greatly through the ages and care is always needed. In this case, one inexpert view had been widely circulated, even after it was discredited (as was once the case on this website.)

A few years ago, a new first definitive reference to women playing golf has been discovered in the Caledonian Mercury newspaper . On 24th April 1738, two married women are reported to have played an match on Bruntsfield Links in Edinburgh, with their husbands acting as caddies. The Edinburgh paper reported that the match attracted quite a crowd and gambling. The women are complimented on their 'dexterity' in holing out as well as how manfully they 'tilted' the balls.  The event was won by the 'charming Sally', though other than her first name, her identity  is not known.

This story was also reported in newspapers in London, Pennsylvania and Carolina, but, surprisingly, went unnoticed for almost three hundred years. This contemporary story makes 'charming Sally' the first woman 'named' golfer, though known only by her first name.

In 1795 at Musselburgh, the women who worked in fish industry at Fisherrow are reported as playing golf on their days off. The Reverend Carlyle, who was Minister at Inveresk and a golfer himself, reported that the Musselburgh women ‘do the work of men’ and played both golf and football.

These activities were formally supported. On New Year’s Day 1811, the club who would become the Royal Musselburgh Golf Club sponsored the women’s golf competition with meaningful prizes – a fishing basket and silk handkerchiefs.

The Club resolve to present by subscription a new Creel & Skull to the best female golfer who plays in on the annual occasion on 1st Jan. next, old style, (12th Jan. new), to be intimated to the Fish Ladies by the Officer of the Club.

Two of the best Barcelona silk handkerchiefs, to be added to the above premium of the Creel.

The ‘weavers’ of Dirleton nearby also played golf on Handsel Monday, which was then interpreted as the 12th January under the old pre-Gregorian calendar.

Sadly the identities of the 18th century players have not come down to us.