It may seem odd that the oldest extant golf course outside Scotland is in France and not in Britain or America, where golf play began earlier. The reason lies in the fact that Pau were able to build an 18-hole course in their original location, while other places such as Royal Blackheath in London were not. The Pau course and club were founded by prominent members of British golf clubs for their holiday entertainment. 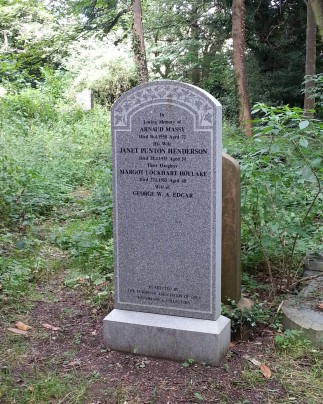 Arnaud Massy's grave in Newington, Edinburgh buried beside his wife by his daughter.

There is a traditional story that British troops were stationed near Billère during the Napoleonic Wars, including Scottish soldiers who played golf. This may be true but there is no knowing where they played and no continuity with the British tourists who came later. While the local French population were very accommodating and provided caddies and hospitality, there is no evidence that any French locals took up the game seriously until later in the 19th century. When they did, they were soon making their mark. The first non-British winner of the Open in 1907 was Arnaud Massy (1877-1950), born in Biarritz on the coast near Pau. In his early working life, he lived in Scotland but he later returned to France where he died. His family arranged for him to be buried in Newington cemetery in Edinburgh.

The origins of the golf club and the popularity of Pau owe much to the therapeutic attractions of the area, following a book by Dr Alexander Taylor, published in 1840, extolling the “curative influence of the climate of Pau and mineral waters of the Pyrenees on disease”. 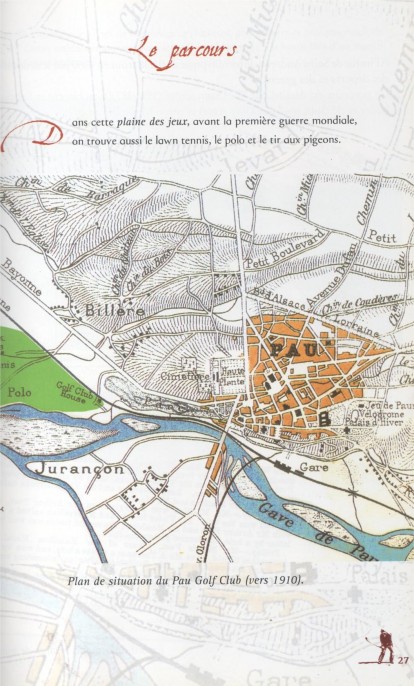 In 1856, several British residents banded together to lease land for a course between the road and River Gave from the Community of Billère and local farmers. The founders included Colonel Hutchinson, who was ‘Uncle Fred’ to the famous Horace Hutchinson, Amateur Champion and golf writer. Horace also played at Pau, as recorded in his “Fifty Years of Golf.” Prominent members of the Royal Blackheath and the Royal & Ancient golf clubs were noted members of Pau Golf Club in its early years. Comparison of the maps and pictures show this is the same area as being played today.

The first course consisted of nine holes and the members built a small wooden shelter nearby. In 1860, the course was extended to 12 holes, played as a round of 18, which was laid out by Willie Dunn, the Royal Blackheath professional. The round required nine 'crossings' on the first nine holes and six on the back nine. Only a few groups would have been able to play simultaneously.

In 1875, further land was acquired on the far side of the tributaries of the River Gave and a new course of 18 holes at 5,485 yards and many fewer crossings was laid out. A partial plan of this is shown below.

In 1877, a ladies pitch-and-put course was created. This lasted until 1941, when it was dug up for food production and never re-instated. The old wooden shelter was replaced with a clubhouse in 1890. 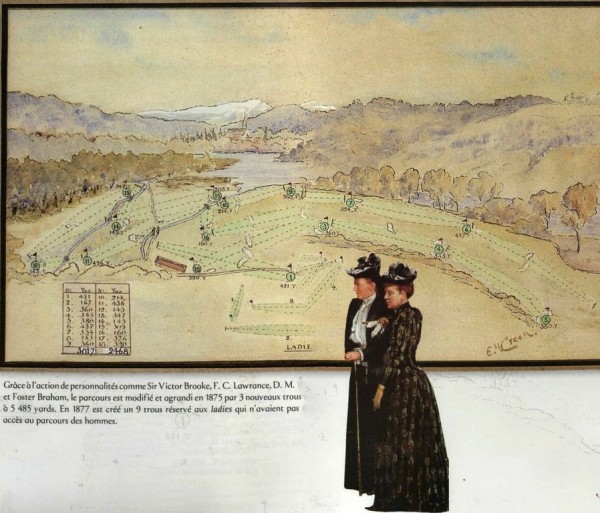 These improvements to the courses and clubhouse are attributed to Sir Victor Brooke. He came to Pau on his marriage in 1864 for health reasons and stayed to raise his family of six children, before dying of pneumonia in Pau in 1891, aged 48. Sir Victor was President of Pau Golf Club and father of Field-Marshal Sir Alan Brooke (Viscount Alanbrooke), senior strategist in the Second World War, who learnt his golf at Pau.

The club struggled after the Second World War, but in 1960 a new lease was signed which gave the club new impetus and it prospers now in the tradition in which it was founded.