In 1844, the Rev Isaac H Gosset became Vicar of Northam. Within ten years he was playing golf on the nearby Burrows of Northam with family and friends, believed to include his brother Driscoll Gosset and brother-in-law Major General Moncrieff, member of R&A St Andrews. The latter’s good opinion of the golfing area is said to have prompted Rev Gosset to bring Old Tom Morris for a month’s visit to advise on laying out a course in 1860.

Initially, there were 18 named holes on The Burrows of Northam, as the course was then called, of which 16 were played as a round of 17 or 22, apparently with several fairways crossing each other. According to Horace Hutchison’s uncle, an early member, the initial holes were laid out by Captain Molesworth, though this may refer to changes later.

Burrows of Northam as seen by Rev Gosset

Westward Ho! is the name of the village nearby, founded in 1863 and named after the 1855 novel Westward Ho! by Charles Kingsley. Over the next decades, the course became known by this name rather than The Burrows of Northam.

The North Devon and West of England Golf Club was founded on 4th April 1864, supported by prominent members of the Royal Blackheath Golf Club. Old Tom visited again and improvements were made. Within two years of its foundation, HRH Prince of Wales became its patron, according it the 'Royal' title.

The gold medal winner in 1865 and 1866 was George Glennie of Blackheath, winner of 1857 club foursome’s national championship at Prestwick and Hon Member of Royal North Devon. The medal round is recorded as over 18 holes.

For some years after Westward Ho! was 18 holes, it still included some fairway ‘crossings’. These were eliminated to public approval in 1889, when the old course of 5,741 yards was extended to 6,247.34 yards.

In 1868 a ladies course of 18 holes was laid out, one of the first, and they acquired space in the clubhouse, which expanded over the years. In 1888 an artisans' club was formed and later still the wives of the artisans also obtained playing rights on the course, (though they had to enter and depart over the caddies’ paths and not via the main entrance.)

Westward Ho! became a mecca for English golfers, if not Scottish ones. Witness this exchange of views between the writer, Horace Hutchinson, the Amateur Champion and prominent RND member, who learnt to play golf at Westward Ho!, and his playing partner James Macpherson.

This popularity is no small credit to the course, as it was six hours by train from London and, for many years, the club only had temporary clubhouses. From 1887, it was a prefabricated iron clubhouse, supplied by Messrs. Isaac Dixon & Co of Liverpool. RND were a very welcoming club and had generous visitor and country member type subscription arrangements.

The most prominent golfer from Northam to date was John Henry Taylor, who won the Open 5 times at the turn of the last century. Born locally, he started his long association with the RNDGC as a caddie while a boy.  Taylor's portrait and some of the clubs that he used to win his Open titles are displayed in the clubhouse. 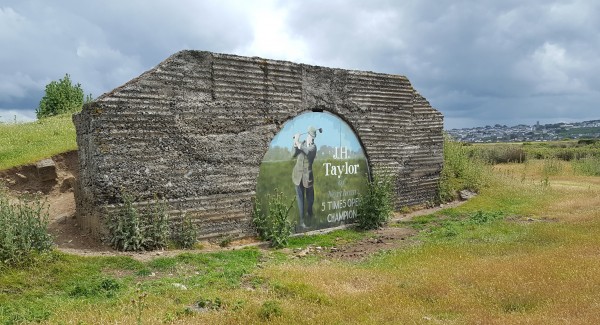 Tribute to JH Taylor on back nine Westward Ho!

Recently the course has experienced problems with erosion which has necessitated changes to the layout.

As the land is common land, walkers and grazing animals have right of way and need to be respected. Though there are fences to keep the animals off the greens, the hazards of animal husbandry should be kept in mind.

"A ball which lies in or touches heaped or liquid manure may be lifted without penalty, cleaned and dropped..."

You have been warned.