Will Scottish golf still be around in 50 years time? There are recent reports of a sharp decline in golf club members, serious erosion of historic links courses and surveys showing that people think golf is the most boring sport in the world. Does golf here have a long term future?

Golf in Scotland should be doing well. There are growing numbers of middle-class potential golfers. Golf is suitable for all abilities and provides exercise for all ages, well into retirement. The sport has a handicap system allowing anyone to play with anyone else. (Even Presidents can play with professionals.) However, there are dark clouds on the horizon. In the last few months, reports indicate that golf in Scotland faces at least three major threats to its prosperity over the next fifty years. The first is the continued decline in the number of members in its 587 golf clubs.

Three years ago, this website reported a drop in the membership rolls in golf clubs affiliated to the Scottish Golf Union (SGU). It resulted in two clubs in Edinburgh going bust and, at the time, the main factors were thought to be rain and recession.

This decline started before the financial recession and, since 2012, it has got worse. At a recent national golf conference,  the SGU reported that Scottish clubs have lost 50,000 members over the last ten years - that is 5,000 members lost every year. With only 170,000 full-time members in Scotland, there will be no golf clubs left here in 40 years time! 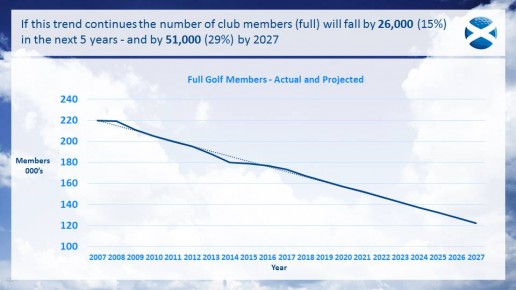 It is not that the number of golfers in the home of golf is dropping dramatically, just that they are no longer wanting to be members of clubs. Unfortunately, the reaction of the golf clubs is making things worse. They are putting up their membership subscriptions to secure their income and putting down their visitor green fees to attract other income. This makes it even more attractive NOT to be a club member. In 2007, golfers only had to play 20 rounds per year to justify their average subscription. That number of rounds has now doubled. In 2017, it takes 40 rounds of golf at £12 per round to justify shelling out for the average annual club fee of £480 per year and few golfers play 40 rounds per year. Only half of all golfers in clubs have valid handicaps or play in competitions. So many golfers really do not need to be club members.  If membership losses and fee increases continue as now, then subscriptions will be 34% higher in five years time. That will drive more members away. The golf clubs are creating a vicious spiral for themselves.

Golf’s demographic is adding to the problem. Golfers aged over 55 years (mostly male) make up the majority of golf club members, whereas those under 24 years are less than 10 per cent. Some clubs are not particularly welcoming to women, ethnic minorities or children and, without them, most experts are pessimistic about the prospects of middling clubs with average quality courses. Clubs will have to be more welcoming and provide much better value for money. Now is the time to rethink the old monthly medal competitions and attitudes to dress.

Of course, club membership numbers will stabilise at a certain point, but at what point and which clubs will be left? The bottom line is there will not be 600 independent Scottish golf clubs in 10 years’ time. The BBC recently reported a similar situation of golf in England.

Erosion at Montrose has eaten away tees on the third hole of the Medal Course and it will threaten other holes unless defensive work is done soon. In places, the Angus links are losing land at the rate of at least 1.5 metres a year. It could become catastrophic very quickly with the wrong combination of high winds and high tides.

Montrose beach from Medal Course 2010 - today it is worse.

So far, none of the greens at Montrose is disappearing, but the same cannot be said of Westward Ho! in south west England, where the seventh green is reportedly under threat. It is a problem that the Royal North Devon Golf Club have been battling for years, but this time they have banned from stopping it by Natural England, which controls the land. Their view is that:

"The dunes and shingle ridge are naturally dynamic coastal features and subject to constant change."

The RNDGC will be allowed to build two new greens, but that means they will have to abandon the two existing ones. 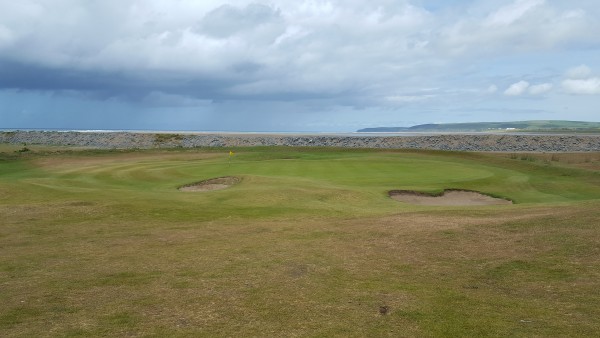 As at Montrose, meetings are being held to discuss the problem, but action on the ground is still awaited. Whatever the cause or the solution, erosion is expected to worsen within three years, so you may want to play the course as soon as possible!

The SGU have advice on, Coastal Erosion, which is nothing new to golf. The present layout of the first and eighteenth holes on the Old Course at St Andrews owe their existence to the 'Bruce Embankment' in 1875 which has held the tide at bay ever since. Some ascribe the real problem to coastal erosion as the attitude that the authorities are taking to the issue.

Erosion may be the lesser of the two evils facing sea-side courses. There are already reports that bad weather has reduced playing time on golf courses by 20 per cent over the last ten years and it could get worse. If global temperatures climb as predicted, causing land ice to melt, then the consequential rise in sea levels will be several metres. That will flood most, if not all, links courses. Climate change is often seen as tomorrow’s problem, but the early signs of what might happen are already with us.

It's official. Golf is the most boring sport in the world.

In a survey of 2,000 people in the UK, 39% thought that it was 'boring', even more boring than cricket. Worse still for the commercial future of golf, 77% of people found golf boring to watch. Only 11% thought golf was an 'exciting' spectator sport. This is a sharp contrast to two other popular middle-class sports, tennis and athletics, which half of those surveyed found 'exciting' to watch and only a quarter found 'boring'. 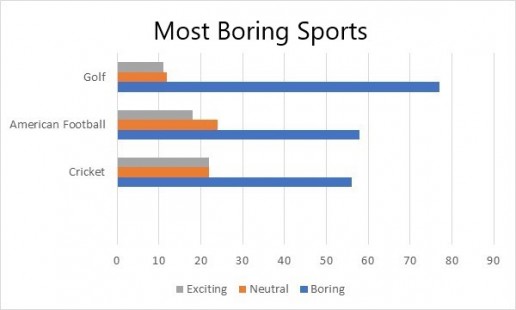 It is little comfort that American football and cricket were also rated as boring spectator sports by almost 60% of the viewing public. Twice as many people thought they were exciting to watch, meaning golf is half as exciting to watch as the next most boring sports!

To make matters worse, the survey was widely reported at length in the national press and not just in the golf magazines.  At least some of the commentators pointed out that golf was exciting to play and the problem may not be entirely due to golf. The coverage of golf on TV features stroke play competitions that drag on for days and flit from one putt to another. This is difficult to follow for the inexpert viewer. It is noticeable that the Ryder Cup which features match play between two teams is a significant commercial success and far from boring (eg 1999)!

All of this really makes you wonder why these rich old men pay so much money to build golf courses.