The Old Luffness course was located on the east side of what is now the Aberlady Bay Local Nature Reserve, the first Nature Reserve in the UK. It is accessed by a footbridge over the River Peffer mouth from a small car park on the left of the A198 road between Aberlady and Gullane.

Sometime before 1867, the golfers in Aberlady began playing on what was known as the Wanster course, which was between Harestanes Wood and Craigielaw Point. Unfortunately, they were competing for the use of the land with the 4th (Aberlady) Corps of the Haddingtonshire Rifle Volunteers. This brigade was formed in 1860 and was head-quartered in the drill hall nearby and used the same ground for rifle practice. The golfers put up with the arrangements for a while but eventually gave up the competition for the use of the ground. After holding a valedictory picnic on the course, they retreated, believing discretion was the better part of valour.

In October 1867, they approached Mr Henry Walter Hope, owner of the Luffness Estate, for permission to lay out a course on his land on the seaward side of the Peffer Burn. He supported this plan enthusiastically and hired Old Tom Morris to open the course with 17 holes in November 1867, within a month of the request. This was a time when people GOT THINGS DONE and Old Tom could lay a course out in a day, putting a flag here and a flag there for the holes. Separate teeing areas were in the future and greens were as smooth as grazing animals and nature allowed them to be. 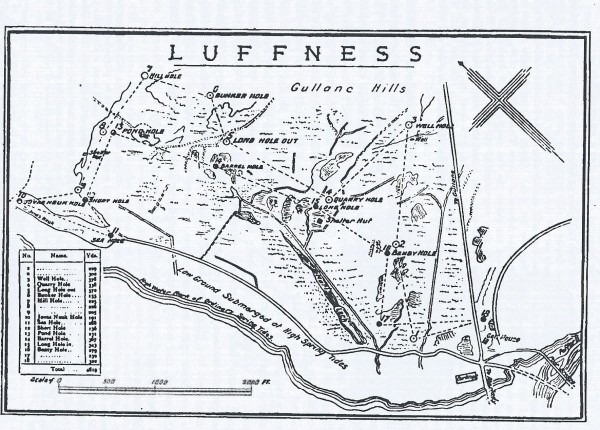 The course was simply known as the Luffness course and the Club prospered over the next decade. Mr Hope asserted his authority from time to time as he was allowing them to play for a peppercorn rent.

Things might have remained this way if it, had not been for the fact that the northern part of the Luffness course was actually on Gullane land and not wholly on the Luffness Estate itself. When the Gullane owners asserted their rights over it and demanded rent in 1893, Mr Hope did not believe that they could restrict play on Gullane common and advised the club not to pay the money demanded. He himself had already decided, again with the guidance of Old Tom Morris, to lay out a new course, Luffness Mill, on his own property to the east of the 'Old' Luffness course.

There was a growing demand for golf and the Luffness New Golf Club began life on the new course in 1894, which became known as Luffness New.

To begin with the old Luffness club paid the rent necessary and extended their lease with the Luffness estate. So for four years the two 'Old' and 'New' clubs played side by side on their courses 'Old' and 'New'.

After they left, the New Luffness course expanded to incorporate parts of the Old. Comparison of the layouts suggests this includes much of the 14th to 17th holes, and probably also western parts of 9th and 10th holes. The 13th green appears to be where the old Luffness 3rd green was.

Further north, the Gullane courses also expanded to take advantage of the departed Kilspindie golfers. The 12th and 13th holes of Gullane 2, and probably also the 14th hole, play over the Luffness Old course. It is likely that other holes on Gullane 3, such as the 9th hole, are also on the old golfing ground.