Coronavirus - Keep Safe and Carry On

Golf has been banned in many countries. When will we see it return?

Golf in Scotland has been banned since March 2020. Some commentators have said that the last time golf was banned was 1945. This is not strictly correct. Although many courses were given over to agriculture or airfields during the Second World War, golf itself was never banned. There were no competitions or change of captains, but golf continued. In fact, Sunday golf began at St Andrews because of the limited time people had to play.

Golf is currently banned in most places in Europe and half of USA. This was undoubtedly the right thing to do. Although technically it might have been possible to play safely, it would have been invidious for golf to have continued while other sports could not. In any case, given the average age of golfers, the likelihood of them gathering before or after playing would have carried unacceptable risks.

This is, however, not the first time that golf has been forbidden. Golf was once banned in the second half of the 15th century. The first (and second and third) references to ‘golf’ were to ban it (with football). At the time, the reason was to promote archery. When King James IV relented, and bought his own set of clubs in 1502, golf went on to prosper. Will that be the case this time? 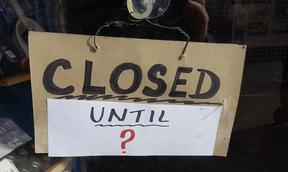 Many optimistically believe that normal play will be resumed this summer. Infection rates and casualty figures are dropping in Europe and America and today there is news that a serology test has been approved, which are all major steps forward.  However, there are also reasons to be cautious.  No country has returned to normal. Allowing greater economic activity and exercise in the UK will require community testing and greater attention to personal spacing, such as wider use of face masks. There are still question marks over the extent to which immunity can be achieved and presently there is no guarantee that a vaccination, (often only 70% effective at best), will be forthcoming this year. Some countries have even had to reverse their relaxation of controls, when infection rates rose again. If golf is permitted this summer, it will be important not to abuse the privilege, which may be difficult as the courses will probably be crowded.

Covid-19 is not the only problem golf is facing. Even before it began, golf clubs were still losing members at a steady rate. In the last few years, several clubs have gone into liquidation and recently more clubs have been added to the list of the fallen.  If all golf clubs now lose several months of play and a year’s hospitality takings, the number of clubs going to the wall can only increase.

It may not be all bad news. One unintended consequence will probably be rule changes surrounding the golf ball. With fewer finances available to lengthen golf courses, limiting the distance the ball can travel is now imperative.

Update 29th May 2020 The Scottish Government has now sanctioned golf for up to 2 people, joining the other regions of the UK which allowed golf the previous week. Most clubs have re-opened to members only.