Wooden Golf Balls: an Assumption and a Fallacy

The use of wooden balls in golf in Scotland is an assumption. In fact, it is almost certain links golfers never played with wooden golf balls.

Almost every golf history says that early golf was 'presumably' or 'probably' played with wooden golf balls. Some even detail the wood that they were made from, such a boxwood. There is one problem with this statement, notably that there is no evidence to support it. No examples of wooden golf balls have been found in Scotland and there is no mention of people playing with or making wooden golf balls or buying them from 'bowars' or similar and certainly no details of what type of wood was used.

In fact, a consideration of the relative merits of the other contemporary golf balls make it more probable than not, that links golf began with a leathery ball and was not generally played with wooden balls.

A complication to golf history is that the word 'golf' is used to describe games such as the above-ground 'target' golf, which was not golf. Wooden balls may well have been used in this game, where their greater resilience outweighed any deficiencies in distance or handling. Golf has also been associated with Mail or Pall Mall (pronounced Pell Mell), a croquet type game, which always used smooth, spherical wooden balls and with Crosse, Crossage or Cholet, which used elliptical, dimpled wooden balls. The descriptions of the construction and types of wood involved in golf balls are derived from these games, not golf. Wooden balls have probably never been used in the links golf game, which became so successful, that it totally eclipsed all these other games.

The British Golf Museum describes the evidence for the use of wooden balls as 'flimsy' and ascribes the basis for the argument to the interpretation of a description of a siege at Orkney in 1614, cited by Harry Everard in 1907. The cannon balls were described as breaking like golf balls, and it was thought that this description would not apply to leather stitched golf balls.

For over a hundred years before 1614, golf balls had been imported from The Netherlands where they were made in industrial quantities. These were probably the 'hairy' ball, used in 'colf', a stitched leather ball filled with cows' hair, flok or similar. Soon after the Orkney siege, in 1618, James VI granted a patent to James Melville and William Berwick to make golf balls in Scotland because so many were being imported that it threatened the balance of trade. These Scottish balls were made by leather workers, mostly shoemakers (cordiners). 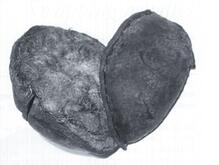 The author of the siege description is trying to find an analogy that his readers could relate to, and did not live in the rich environment that we have from which to choose the technically correct analogy. Pictures of a burst-open 'hairy ball', discovered in 1984 in Amersfoort and stitched differently to later balls, looks like a good analogy for a broken cannon ball, certainly for the period.

'Cordiners', cobblers or shoemakers, at Leith are mentioned in a legal dispute as also making golf balls in 1554 and these would be stitched leather balls, not wooden balls. The performance of these balls were superior in distance and control to wooden ones, and available at economic prices. For several centuries, leather balls were made in several towns in the Netherlands and it is estimated that peak production reached 500,000 units in total per year. Certainly a few thousand leather balls for golf would not have been an unusual amount to produce for export to Scotland, which are recorded from 1486 onwards.

Another reason for believing golf balls were once made of wood is the presumed assumption that golf was similar to continental games which did use wooden balls and therefore the derived assumption is that wooden golf balls would have been used in Scotland. Examples of wooded balls for these games have been found in the The Netherlands. However, although there is evidence that elements of golf are derived from a continental games, it developed into a different game, while the comparable game on the continent died out completely by the 17th century. The evidence at the moment is that the ball adopted and imported from The Netherlands for golf was the stitched leather ball, precisely because it was better suited to the links golf game that the Scots developed.

It has always been assumed that, because 'feathery' balls were expensive and appeared later, there must have been a precursor. It is also known that there were cheaper alternatives called 'common' golf balls. For some reason these are all taken to be the wooden ball and insufficient weight has been given to the existence, in large numbers, of 'hairy' balls and similar better alternatives to wooden ones. 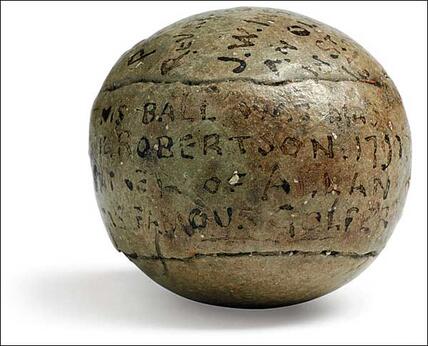 Authoritative sources assess the distance that a wooden balls would be hit at around 75 metres , while contemporary tests with 'featheries' show 200 metres as the norm. The round wooden balls had no 'dimpling' and poor flight and handling. It is likely 'hairy' balls were closer to 'featheries' than wooden balls and could be driven 135-150 yards with comparable handling properties. Golfers would have used these in preference to wooden ones, if they were available, and they were available.

The 'feathery' ball on the links was the making of the game of golf, and the likely precursor to this was the 'hairy' ball, not the wooden ball.