Chuiwan or Chui Wan ( 捶丸) was an ancient 13th century royal bat and ball game played in China which had similarities to putting in golf and an etiquette similar to that of golf. Is this just a strange coincidence or the product of industrial espionage?

Given the commercial success of golf, nothing is going to stop people in other lands trying to claim its true origins. This is true of Chuiwan, described as a 'golf-like' game, though it is more like a very short pitch-and-putt.

One website claimed that "Technically speaking, Chuiwan and golf are the same." The truth is somewhat different. Superficially speaking, they have similarities, such as hitting balls towards holes with complex rules and gentlemanly etiquette. Technically speaking, the rules and the balls and the scoring and the course and the clubs are different. Chui Wan means 'hit ball'. It and other 'hit ball' games are less like golf than baseball is like cricket. Apart from the technical differences, there is also the total lack of any proven connection between Chuiwan and either golf or similar 'hit ball' games in Europe.

Explaining how Chuiwan was played is not easy, as it was complicated. Luckily, the Mission Hills golf complex in China has produced a short, animated video summarising the game, which can be accessed by clicking the picture to the right. Chuiwan was played with wooden balls and iron head clubs on a prepared area of ground, similar in size to a large practice putting area. It was clearly not links golf, nor were any of the European games with claimed ancestry to golf.

Chuiwan was played for several hundred years at the royal Chinese court. Its rules, called the Wanjing, meaning 'ball treatise', was published in 1282, but probably written a hundred years earlier. There is a later picture of Emperor Xuanzong of the Ming dynasty (1426-1435) playing the game. Born in 1399 as Zhu Zhanji, he reigned under the title of Xuande and is the first known player of Chuiwan. Chuiwan seems to have died out soon afterwards during the Ming dynasty. This may have been because it was not as exciting a game as golf is, which was also true of other 'golf-like' European games. 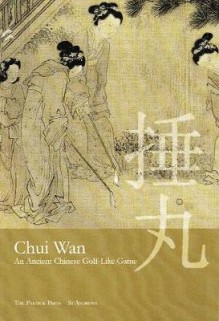 Chui Wan is the subject of a new book published in 2017 with a complete translation of the its rules, the Wan Jing (丸經). For details of the book, its authors and its contents and how to purchase it - click here.

The authors of Chui Wan dismiss the idea that golf could have been directly influenced by it or that the Mongols could or would have brought Chuiwan to Europe, as posited by some historians. They also discount another theory that it could have been merchants on the 'silk road' who were conduits of the game to Europe, as this is again unlikely as most merchants only travelled on sections of the road, not the whole length.

There were, however, many Europeans at the Chinese court in 13th century and it is generally believed that gunpowder came to Europe from China through 'industrial espionage', as it suddenly appears in Europe with no prior experimentation. The book contains details of a traveller called William de Rubruck, who travelled to China in 1253. He was a fellow student in Paris with Francis Bacon, who was an early user of gunpowder in Europe. De Rubruck or somebody like him are therefore possible candidates for 'smuggling' Chuiwan to Europe.

Apart from putting to holes, Chuiwan used a raised tee, although this is thought to be a wide base rather than the cone of sand as in early golf. The scoring was complex, with up to 3 points (tokens) awarded for winning a hole in under three strokes. The winner was the first to 10 or 20 points. There were no points for four strokes or over, which is reminiscent of stableford completions, but not used in early golf. There are other elements in the Wanjing found in modern golf, such as using flags or golf bags, which were also not present in early golf, but which developed later, showing there can be no direct read over. This fact should serve as a warning that similarities in games will be found around the world, as socio-economic development produces the same types of games and middle class attitudes to playing them. 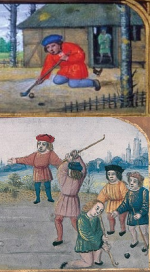 One of the most intriguing aspects of Chuiwan is the fact that the second stroke was made from a squatting position, called 'hitting with low knees' in Rule 10 of the Wanjing. This non-golf stroke and its similarity to Flemish 16th century illustrations presumed to be 'colf' are mentioned in the book at page 70, but its significance is not emphasised. It means there is an aspect of Chuiwan which resembles colf but not golf. It also means that, while the two concepts of putting to a hole and gentlemanly etiquette could easily have been independently created, this third coincidental aspect of the games of Chuiwan and Colf is harder to explain. Both games start by hitting the ball from the standing position, but then the players appear to squat for the putting stroke. With three points of similarity, it definitely opens the door to a possible connection between the Chinese and the Dutch games, and therefore indirectly with golf.

The Analects of Confucius (孔子)

Confucius is the latinization of Kǒng Fūzǐ, meaning Grand Master Kong, the formal name of the philosopher who lived 551-479 BCE, now commonly referred to as Kǒngzǐ (Master Kong or 孔子) by most Chinese. Many years after his death, his teachings were written up as the Analects, meaning 'sayings', attributed to him. Some of these bear a striking similarity to the etiquette of Chuiwan in the Wanjing rules, which the book summarises with examples.  The etiquette of Chuiwan and Confucian philosophy was based on doing things 'properly', such as Analect 3.7

There is nothing which gentlemen compete over, but they go up, bowing to each other, and when they come down they have a drink. So, even in their competition with each other, they are gentlemen.

Chui Wan and Confucianism were elitist. Many have commented that Confucianism was very discriminatory on the basis of class and gender.

Chui Wan - Emperor Xuanzong of the Ming is playing (1426-1435), held in the palace museum Beijing

So could Chui Wan have found its way to Europe? It was clearly not imported wholesale, but the idea and some elements could have been brought over, which in turn affected the development of colf and indirectly therefore golf. If this is true, then all golfers are modern day followers of Kǒng Fūzǐ (孔夫子). It cannot be ruled out.