Skibo Castle is home to the exclusive Carnegie Club and one of the best links golf courses in Scotland. A limited number of tee times are now available to non-members in the summer months. 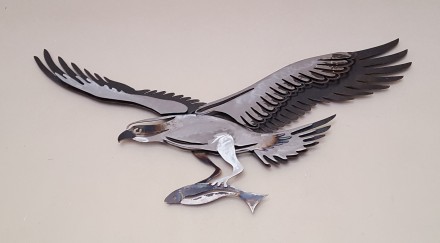 Osprey motif of the Carnegie Club

All golf clubs are private membership clubs and most allow visitors to play their courses. Of the oldest clubs, one notable exception is Glasgow Golf Club, where you can only play its home course of Killermont as the guest of a member (though you can play their other course, Glasgow Gailes, as a visitor).

There are however several exclusive golf clubs in the world with high joining fees and annual subscriptions, who normally don't allow visitors to use their facilities. A few have been established in Scotland. Notable among them is Skibo Castle in the north of Scotland, which is home to the Carnegie Club, named in honour of Andrew Carnegie, the Scottish American industrialist and philanthropist, who endowed thousands of public libraries. 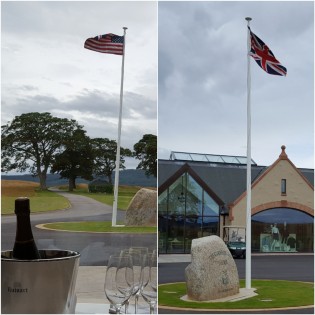 Carnegie retired to Skibo in 1898 and invested heavily in its redevelopment with all the mod-cons of the day. Many notable celebrities visited, including Rudyard Kipling, and the estate remained in family hands until the late 20th century, when it was acquired as a private club and restored to the Carnegie décor, with many original furnishings. Nowadays,the castle and its facilities are generally only open to members and prospective members of the Carnegie Club. (The fees are not published by the club, but can be obtained on application and are found in articles elsewhere on the web).

Andrew Carnegie had the unique permission to fly a flag which had the Union flag on one side and the Stars and Stripes on the other. It is a tradition which Skibo continues, both at the castle and the clubhouse.

In 2003, the estate and course were bought by its current owner, Ellis Short, who inaugurated significant renovations, including improvements to the golf course. In the last few years golf has been opened to non-members on weekdays on a limited basis of two 4-balls per day in summer months. The cost of £300 per person includes on-course hospitality and lunch in the clubhouse. This compares favourably to costs at courses with less to offer than Skibo.

The golf course itself is a compact links course, which was originally a 9-hole course commissioned by Andrew Carnegie so that he could learn to play golf better. He was an enthusiastic golfer and a member of Royal Dornoch Golf Club, but he suffered a humiliating experience on his first visit to the Club, due to his lack of golf skill. He then made the decision to build his own course for lessons and practice. Carnegie became Captain at Royal Dornoch and endowed them with their most prestigious trophy, the Carnegie Shield.

The old 9-hole course disappeared through neglect. When Skibo was first purchased as a commercial operation in 1992, a new 18-hole course was commissioned and laid out by Donald Steel a few years later, though this has recently been completely redesigned by Mackenzie & Ebert.  They say that today's 18th hole is little changed from the previous course, but other holes have been significantly improved. 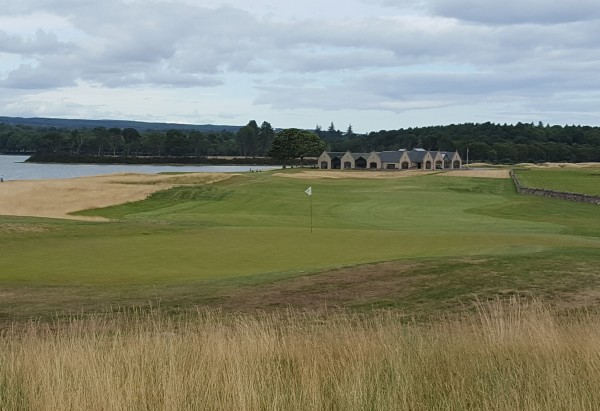 Skibo - 17th green with 18th and clubhouse in the background

The current course length is 6207 yards from the members' tees with a par and SSS of 71.  The signature hole is said to be the 17th hole which is a short par 4 that is both playable and testing, with real jeopardy for good golfers who take the green on.

The lunch is provided in the golf clubhouse (see above for the exterior and below for the interior.) There is also a 'halfway' house on the course, pictured here. 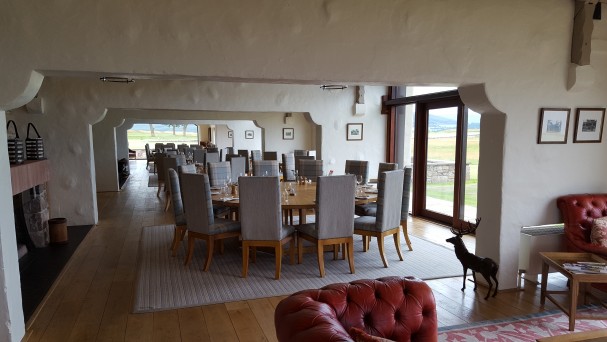 Details of Public Tee Times are available on-line. The Club will send you travel directions, which should be read carefully, as there is only a small sign in the local village to tell you where to turn. It has the osprey motif of the Club on it, but is easily missed. (Still, it is better than Muirfield, which has no sign at all).