Lieutenant General Alexander Mackenzie Fraser (1758 - 1809) was not a man who let war get in the way of playing golf. He served in almost every contemporary theatre of war and still found time for a family life, politics and playing golf. He is known to have been a member at Aberdeen and Blackheath golf clubs and probably played at Fortrose and elsewhere on his travels. 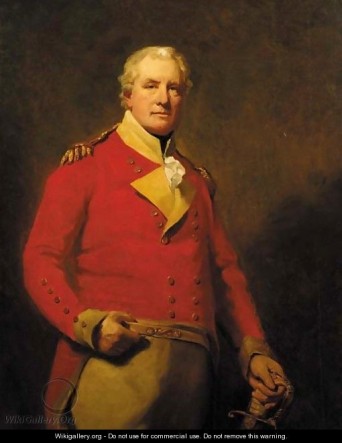 Alexander Mackenzie was born in 1758 at Tore and was the fourth son of Colin Mackenzie 6th Laird of Kilcoy and younger brother of Charles Mackenzie, who would become President of Fortrose Golf Society in 1793.

The ancestral home was Kilcoy Castle, which still exists. It was derelict for much of the 19th century when Charles's son and Alexander's nephew, Colin Mackenzie, took the roof off to save taxes, when he lived in London. Now restored, it is in other hands.

Alexander took the additional name of Fraser in 1803 by Royal licence when he inherited titles through his mother, Martha Fraser and his aunt Elizabeth Fraser. Martha was a descendant of the Hon Sir Simon Fraser of Inverallochy, second son of Simon Fraser, eighth Lord Lovat. When the direct male descendent, Charles Fraser Esq of Inverallochy, had no sons, his estates and titles passed through his daughters, the eldest of whom was Martha Fraser who had married Alexander's father. From her, Alexander Mackenzie inherited the title to Inverallochy and later he inherited the estate of Castle Fraser from her sister, Elizabeth.

Alexander was educated at Aberdeen University. He initially joined the banking company, Sir William Forbes & Company, to complete his education.

However, he was not destined to be a banker and in 1778 he became an Ensign in 74th Foot and later that year he accepted Lord Macleod's offer of a commission into the 73rd Regiment of Foot. He fought with distinction at the siege of Gibraltar and served during the American war of Independence, where he was wounded. At this point, he came out of the army and resumed civilian life spending his time developing the small estate near his place of birth that he acquired in 1784. This is probably the land between Belmaduthy and Munlochy. Belmaduthy House was passed down as part of the Kilcoy estate until 1935, when it burnt down and was not rebuilt for lack of funds. Shortly afterwards, most of the estate was sold.

In 1783 Alexander is noted as country member of the Aberdeen Golf Club, now the Royal Aberdeen GC, as "Captain Alexander Mackenzie late of 73rd regiment". Aberdeen was where he went to university so he probably knew the Queens Links well. Three years later he married Helen Mackenzie, sister of the influential Francis Humberston Mackenzie, who was to become Earl of Seaforth in 1797 and who would be his patron in a number of his career positions.

When his brother-in-law raised the First Battalion of the 78th Highlanders, or Ross-shire Buffs as they were called, he was appointed Lieutenant-Colonel on 24th July 1793. One of his fellow officers and future aide-de-camp was Captain Duncan Munro, who joined the regiment on the same day. Duncan is noted as Croupier at the Fortrose Golf Society dinner in 1793. Charles Mackenzie, his brother and the Fortrose club president, was an Ensign in the same Regiment. It would not be a stretch of the imagination to presume that Alexander Mackenzie would also have been present at the golf meeting and dinner. He was probably playing golf there for some time before this meeting as Fortrose was just six miles from his estate, much closer than Aberdeen.

In September 1794, the 78th Regiment was ordered to the Low Countries via Guernsey to reinforce the Duke of York’s army. They were stationed on the island of Bommel with Lieutenant-Colonel Mackenzie in command. During this time a Dutch spy was caught signalling to the enemy using his windmill which he would start just prior to allied artillery fire. He was convicted and sentenced to death, but Mackenzie reprieved the sentence on the condition that he did not do it again or he would be executed.  Soon after, the regiment saw action at Nijmegen and then had to retreat in appalling weather to Bremen, where they embarked and returned to England in May 1795. A few months later they were involved in a brief excursion to Quiberon and the occupation of the Ile D'Yeu on the west coast of France before returning to Spithead in December 1795.

So it was the 'Col A Mackenzie' and 'Capt Munro' are listed in the records of the Knuckle Club as being present on both 26th December 1795 and on January 1796.  The Knuckle Club were a Masonic splinter group of golfers who played Blackheath Common and who later merged back into the main club there.

Blackheath Common in south-east London, where the Knuckle Club played

By June 1796 Mackenzie was off again, this time in an expedition to the Cape of Good Hope, where his battalion joined the Second Battalion of the 78th, shortly after their successful campaign. Afterwards he and the enlarged 78th Regiment were sent to India from 1796 to 1800. On his return, he enjoyed two years of domestic peace and quiet until his wife Helen died in 1802. From 1803 to 1805 he was assigned to the Home Staff, latterly commanding one of the Hanoverian infantry units for a time. It was during this period that he inherited the Fraser estates.

At the general election of 1802 Mackenzie became MP for Cromarty, a constituency of less than a dozen voters and effectively a 'pocket borough.'  For political reasons, the seat had become the gift of his brother-in-law and he was 'elected' as a supporter of the Tory party, then led by William Pitt the Younger. His politics are not known.  Associates of his supported the Enlightenment, but opposed the abolition of slavery and it is to be presumed that he thought similarly. He certainly supported the defence of the Realm and in April 1806 he voted against the repeal of the Additional Force Act, which had been brought in three years earlier to increase the size of the armed forces in the face of possible Napoleonic invasion.

At the election in 1806, he became MP for Ross-shire, a constituency of about 70 people and is generally thought to have been independent, but his politics were academic as he had returned to active service and was largely an absent MP until his death in 1809.

At the time of the election, he was already in Sicily, when early in the following year, as Major-General Mackenzie-Fraser, he was put in charge of a substantial force sent from Sicily to occupy Alexandria in Egypt. On the 20th of March 1807 he received their surrender just four days after disembarking. Unfortunately incursions inland were disastrous, with his force losing two engagements at Rosetta, now known as Rashid, during which they suffered heavy casualties. So on 19th September, an agreement was signed with Mohammed Ali, then the de facto power in Egypt,  for the British troops to leave the country. 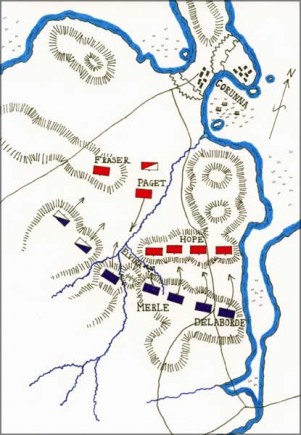 He does not seem to have been blamed for this reverse and after Egypt he was given command of the 1st Division to be sent to aid Sweden under Sir John Moore in 1808 in their fight against the Russians. It is known that he was granted two weeks’ leave of absence on 29th March 1808 to attend to urgent private business before he went to Sweden. The army never disembarked in Sweden but went on to Portugal, where Mackenzie-Fraser distinguished himself at Corunna, for which he was awarded the army gold medal and for which he received the thanks of the House of Commons on 25 January 1809. It is said that he was instrumental in supporting Moore in his decision to engage the enemy in the fighting retreat, made famous in the poem by Charles Wolfe. By now Alexander was Lieutenant- General and one of the most eminent members of the British establishment.

In the summer of 1809 he commanded the third infantry division in the infamous Walcheren campaign in the Netherlands. Sadly he became one of thousands of British soldiers who caught malaria, dubbed Walcheren Fever. It is reported that 106 soldiers died in action, but 4,000 died of sickness and the campaign was abandoned. Mackenzie-Fraser made it home to England, where he died from the fever and complications at the house of his brother-in-law Sir Vicary Gibbs in Hayes in Kent on 13th  September 1809, aged 52 years old. At his request he was buried locally, in St Mary the Virgin graveyard, with only a few friends and family in attendance.

He had two surviving daughters and sons. His sons too had noteable careers. His oldest son, Charles Mackenzie-Fraser of Inverallochy and Castle Fraser, became a Captain in the Coldstream Guards and Colonel the Ross-shire Militia. Charles also became an MP like his father. His other son Frederic Alexander Mackenzie became Lt-Colonel in the army and Quartermaster General to the forces in Canada. Frederic's second wife was the daughter of the Governor General of Canada.

There were many military personnel who played golf at this time and in the coming century. Some of them made significant contributions to the development of golf, but none could claim as illustrious and varied a career as Lieutenant-General Mackenzie-Fraser of Inverallochy and Castle Fraser. 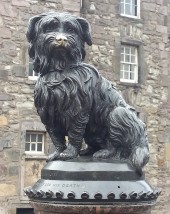 There is an interesting postscript to this item.  Shortly after its initial publication, it was discovered that Alexander's wife Helen was buried in in the Mackenzie family plot in Greyfriar's Kirkyard in Edinburgh. Charles Mackenzie, his elder brother, was also laid to rest in the same plot eleven years later.  This kirkyard is 200 yards from the National Library of Scotland, which is where the newspaper article documenting Charles's presidency of the Fortrose Golf Society 1793 was discovered a month previously.

The original inscriptions are noted below, though the plaque to Charles Mackenzie has been defaced.

Epitaphs and Monumental Inscriptions in Greyfriars, collected by James Brown 1867

This article is based on key information provided by Col William Gibson (Rtrd) of Royal Curragh GC.