A statue of Dr John Rattray, surgeon, Jacobite and golfer, has been installed at Leith Links, 10 years after the planning for it began and 275 years after the events it commemorates.

The bronze statue was made by the Scottish sculptor, David Annand. It depicts John Rattray about to tee off in the first ever golf competition, which Rattray won, in 1744. It has taken the Leith Rules of Golf Society ten years to make it happen with work and contributions by hundreds of golfers in Scotland and around the world. 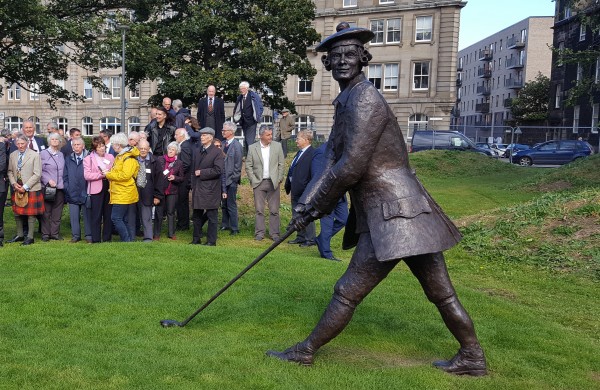 The Rattray Statue on Leith Links, just after its unveiling 11th September 2019. The Chief of Clan Rattray can be to seen in his kilt on the left.

The statue was unveiled with a ceremony and speeches by representatives of the City of Edinburgh, Clan Rattray and the Leith Rules of Golf Society. Unfortunately, the clubhouse of the Leith Golfers, originally built in 1768, no longer exists (it is under the flats on the south side of the links.) So, refreshments were taken in the nearby Queen Charlotte Rooms. 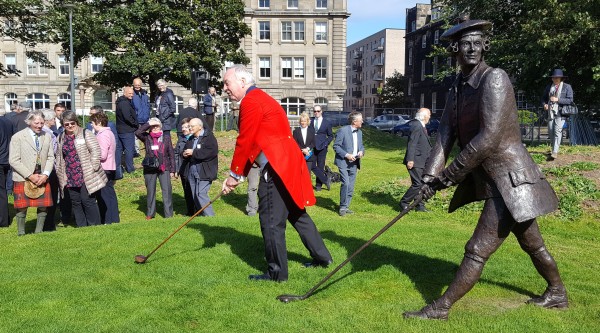 The greatest significance in the commemoration is really the fact that the first rules of golf were drawn up for the 1744 competition at the insistence of the City of Edinburgh, who had sponsored the prize of the silver club. This first set of 13 rules, signed by Rattray, still exist at the National Library of Scotland and copies hang in golf clubhouses all over the world. There were ten other golfers in the first competition, all members of the Leith Golfers society. Over the years the society underwent several changes of name and they are now called The Honourable Company of Edinburgh Golfers, based at Muirfield on the outskirts of Gullane in East Lothian.

The Rattray statue has been installed on the north of the links, near the bowling greens. It is surrounded by mounds which are being sown with marram grass to give visitors a feel of the area at the time.

Nearby are three bronze plaques showing the first set of rules; biographical details of Dr John Rattray; and notes on the statue itself including a list of the main benefactors.  A full list of subscribers can be found on the LRGS website.

Dr John Rattray had a very colourful history. He was a surgeon by profession and member of the Royal Company of Archers. After winning the golf competition in 1744 and again in 1745, he was caught up in the Jacobite rebellion as physician to Bonnie Prince Charlie, also a golfer, and put under arrest following the battle of Culloden. Rattray was initially released, but then he was arrested again and held in London until 1747, when he was finally freed. He was extremely lucky to have escaped execution, which was the almost inevitable fate of others who were caught. Most people credit his benign treatment to the intervention of Lord Forbes of Culloden, fellow member of the Leith Golfers.

Leith Links was a renowned golf course of 5 (later 6) holes for about 400 years until the end of the 19th century, when the area became a formal park and crowded with visitors.  It was, in any case, too small to expand to 18 holes, which had become the norm for golf courses. By this time, only the Leith Thistle Golf Society and a few others were playing there and they gave up.  The original society of Leith Golfers had departed to Musselburgh in 1833 where they remained until 1892 when they moved to Muirfield.