Below is the outline of chapters 1 to 4 of Bruntsfield Links - Home of Club Golf.

This opening chapter provides the background to the events that follow, from the first mention of Golf in 1457 in Edinburgh to the first golf Rules and competition in 1744 at Leith. The environs of Edinburgh were where many early documented golf events took place, including the first documented golf ball manufacture, golf instruction manual and golf match.

There is summary of the stories of early golf in Edinburgh including the first ‘International’ golf match at Leith involving the Duke of York, John Paterson and Andrew Dickson, the world's first named golf caddie.

Golf is first documented on Bruntsfield Links in 1695 and the earliest 'clubhouse' was 'Maggy's Houff', immortalised in a poem by Allan Ramsay run by Margaret Johnston. Not only has her death in 1711 been traced, but also her marriage in 1697. By the time she died, golf was so popular at Bruntsfield that the City Council banned it in the summer because it interfered with the work of the quarrymen on the Links.

Bruntsfield Links is situated on the Burgh Muir and the term Wright's Houses derives from 'Wrichtishousis', a collection of cottages near the eponymous mansion. There is a summary history of these areas and why the first golf clubhouse was built at Bruntsfield. 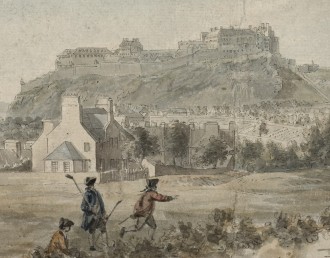 Golfhall was built in 1717 by James Brownhill, a property developer and tycoon. He died in 1729 and his estate papers, and later sales advertisements,  provide the previously unknown names of the early tenants as well as more details of Golfhall. It had a dozen rooms over three floors, situated in extensive grounds with out-houses and a garden, a bowling green and a byre.

For the whole of the last century, knowledge of Golfhall was scant. Not only do we now have the full description, but it turns out that Golfhall is depicted in several paintings, including a famous early picture of golf by Paul Sandby in 1746.

A very important early tenant of Golfhall is the publican, Robert Biggar, who was also a champion archer and golfer. There is a mini biography of him, including his ten year legal battle over a gambling debt, which went all the way to the appeal court and set a precedent in Scottish Law for 300 years.

An equally important, newly discovered tenant is George Neilson, the official bow-maker of the Royal Company of Archers from 1720 to 1760. He was also a golf-club maker, meaning that golf-club manufacturing at Bruntsfield Links started 40 years earlier than previously thought. George Neilson trained his own son, Robert Dickson, and James Dickson, whose father was a clubmaker in Leith. they both went on to be well known clubmakers in their own right down at Leith.

George Neilson also trained Thomas Comb. Comb stayed at Bruntsfield and went on to buy Golfhall outright in 1760 and made golf clubs there for almost 40 years.  Several other new golf-club makers from this period have also been found. Thomas Comb conducted many property deals during his ownership. Even after he sold the main building, he stayed on as a tenant until his death there in 1797. The history restores him to his proper place in Bruntsfield history as a major influence on golf there.

The first recorded golf match on Bruntsfield was between two married women in 1738. This event only came to light a few years ago, mainly because the records of the event were in newspaper records that were not available in Scotland. The winner of the match was Charming Sally. Unfortunately, no hint of her identity has been found to date.

The book has details of first minutes and rules of Burgess golf club as well as key minutes of Bruntsfield Links Golfing Society, though both were only noted some time after their formation.

The full list of chapter topics on the early days of Golfhall is as follows:-

The fourth chapter covers the turbulent years before, during and after the Napoleonic wars (1803-1815). This was a very disruptive time and it took its toll on golf and golf clubs throughout Scotland. The accounts of this time are very episodic, but the stories are probably the most fascinating. 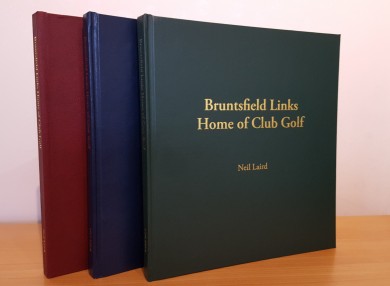 The Edinburgh Burgess Golf Club abandoned Golfhall for a time to use nearby Captain Rollo's house and played some competitions at Leith, with serious consequences because of the differences in the rules on the Stymie that applied at the two course. As a result, the Burgess club split into two factions and could well have disappeared.

There were more pictures made of Golfhall, one by the world famous artist JMW Turner in a sketch in 1818 and another by an unknown artist, which had been published years ago the wrong way round! Neither of these pictures has been seen correctly in print before.

Golfhall can be clearly discerned on most of the maps produced over this period. The pictures and the maps and the histories all tally with each other. Surprisingly, this has not been noticed or pointed out previously, when the location of Golfhall was thought to be unknown.

Solutions to several mysteries are proposed including the origin of the name Bruntsfield; a famous picture of Golfers on Bruntsfield Links (who are actually Shinty Players on the Meadows); the exact location of golf on Calton Hill; and the identity of the first golf club recorded as drinking champagne.

This era was a period of change. Golfhall was mainly referred to the 'Golf House west end of Bruntsfield Links' and later as the 'Golf House Tavern'. Ownership of it had passed to the Lyon family from the west coast of Scotland. At the Golf House Tavern and elsewhere at Wright's Houses, significant building developments were underway. The Bruntsfield golfers were becoming much more organised and several local characters became famous in the own right. Stories were being published about Caddie (Daft) Willie Gunn and the Cock o' the Green, otherwise known as Alexander McKellar.

For the first quarter of the 19th century, the main club-masters for the golf clubs were Henry and James Young and Mr and Mrs Adam Henderson. Mrs Henderson served as club mistress to the Bruntsfield Links Golfing Society for over a decade. There were other publicans at Wright's Houses at this time and it is likely golf was still popular, despite the uncertainty of the war that raged on the continent.

Most importantly of all, this is the fact that James McEwan arrived and started his famous golf-club making business, which his decedents would continue at Bruntsfield for the next century. In 1790, James was joined by Douglas Gourlay from St Andrews. Douglas had been widowed, but courted and married an Edinburgh girl called Mary Douglas and then came to Edinburgh to make his fortune making 'featherie' golf balls. This second marriage and its aftermath were completely unknown to history before the publication of this book and the details make fascinating reading. Gourlay's son and grandsons also continued making featheries at Bruntsfield, for which they became nationally famous.