Golf history in Edinburgh is much more extensive and important than generally supposed.

The first documented mention of the word 'golf' is in Edinburgh on 6th March 1457, when King James II banned 'ye golf' in an attempt to encourage archery practice. This royal ban was repeated in 1471 by his son, James III, and again in 1491 by his grandson, James IV.

King James IV spent February 1503 in Edinburgh and his household accounts record that he purchased golf clubs and balls there, only a year after his first purchase in Perth. There is also a note by the Court Treasurer drawing money for the King for a payment in respect of golf with the Earl of Bothwell, which may be a lost wager. The purchase may relate to golf elsewhere but, if in Edinburgh, it is not known where he played; it could have been Leith Links, but it was probably not Bruntsfield Links.

The first mention of golf in relation to Leith dates from a reported dispute in 1554 between the cordiners of the Cannongate and the cordiners and ‘gouff ball’ makers of North Leith. This is only two years after the Charter mention of golf at St Andrews and the second oldest located mention in Scotland.

Leith was the site of some of the first injuries in golf, including 1575 when golfers were attacked and, in 1690, when Sir Robert Sibbald was injured by a golf swing when crossing the Links.

Edinburgh Burgh records of 1593 bemoan the fact that Edinburgh churchgoers were playing golf in Leith instead of going to church. On 16th February 1610, South Leith Kirk Session proposed a fine of 20 shillings by anyone found playing golf (or bowls or archery) between sunrise and sunset on Sunday.

These persecutions continued until 1724, which marks the last official Kirk prosecution in Scotland for Sunday golfing, when the Leith innkeeper, John Dickson, was accused of giving victuals to Sabbath golfers.

Tradition says that many notable people played golf at Leith including the Bishop of Galloway in 1619 and King Charles I in 1641, where he heard about the Irish Rebellion.

In 1672, the lawyer, Sir John Foulis of Ravelston, records playing golf in Leith as did the medical student Thomas Kincaid in the winter of 1687-8. 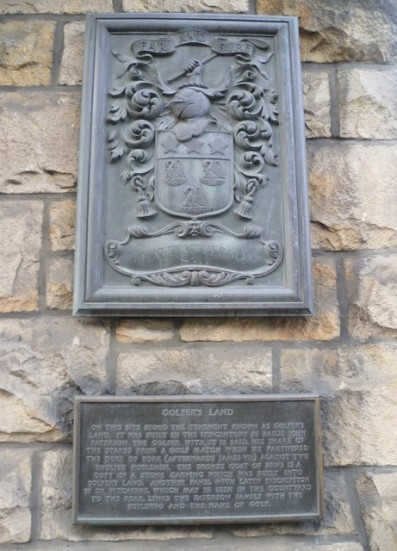 More significant is the record of the first ‘international’ golf match in 1681, between Scotland and England on Leith Links. The Duke of York, brother of King Charles I and future King James II/VII, was then in residence at Holyroodhouse as the King’s Commissioner. Two English courtiers claimed that golf was an English game. The Duke challenged them to a golf match to prove it, choosing John Patersone as his playing partner. Patersone was a cordiner and golf club maker and ‘champion’ golfer. Not surprisingly, the Duke and his partner won for Scotland. Patersone bought a house at 77 Cannongate, called Golfer’s Land, with his share of the winning purse that the Duke generously split with him.

When John Patersone died, he also owned a house in Leith, which Council records show had the special right to pay the feu (ground rent) with a set of golf clubs.

A local boy, Andrew Dickson acted as caddie or rather forecaddie for the Duke of York during the match above and thus became the world’s first recorded caddie. He later became a golf club-maker and recounted the story of the match in an interview with James Tytler, an Edinburgh ‘antiquarian’, as reported in the Thistle Golf Club history published in 1824.

The most famous golf event on Leith Links took place on 2nd April 1744; the occasion of the first golf competition anywhere in the world arranged by a group of golfers who were to become known as the Honourable Company of Edinburgh Golfers. The Council who sponsored the prize, a silver club, insisted on a set of rules for the competition. This was the first set of rules of golf, which could be considered the origination of the game itself. 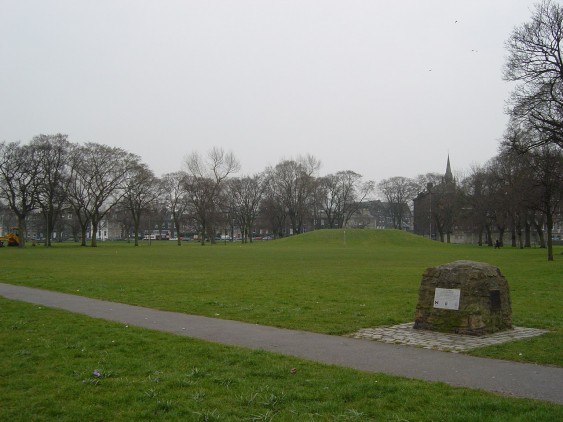 A cairn on the links commemorates this and has an outline drawing of the 5-hole course used in 1744 in the competition for the silver golf club presented by Edinburgh City Council.

The rights of golfers to play at Bruntsfield are noted in Council records from 1695 and most famously Alan Ramsey published an ‘Elegy on Maggy Johnson who died in Anno 1711’, which records the fact that she was the keeper of a tavern at Bruntsfield, where golfers used to meet.

The Honourable Company of Edinburgh Golfers were playing at Leith during the same period and thus the first golf societies were Edinburgh based.

In 1717, Mr James Brownhill built Golfhall, which the Bruntsfield golfers used as their clubhouse. It can be seen in the 1747 painting by Paul Sandby. Later it was extended and developed and became known as the Golf House Tavern, seen in the photograph below.  More details of the landlords and clubs that used it can be found here.

Apart from two temporary moves elsewhere for a few years, the Burgess club met there until 1877, even after they officially moved to Musselburgh in 1874 and built a new club-house there.

Golfhall / Golf House Tavern was demolished, as was the Golf House at Leith built in 1768 by the Honourable Company, which they used until they left for Musselburgh in 1834.

The Bruntsfield Links golfing society met in Golfhall until 1852 when they moved to 30/31 Wright's Houses. They used the first floor and then the ground floor as their official clubhouse until 1876. However, they continued to rent part of the building for aged members who could not travel to Musselburgh until 1894. Shortly after that the building was completely renovated and became the Golf Tavern of today.

Details of some of the club-mistresses of 30/31 Wrights Houses are given in Bruntsfield Links Golfing Society. This building, known today as the Golf Tavern, still exists, and hires out clubs and balls for the short hole course on Bruntsfield Links.  It is the oldest, longest serving golf clubhouse in the world.

Bruntsfield Links was a thriving area for golf club-makers and golf ball-makers from early in the 18th century, when George Neilson Jnr, son of bow-maker to Royal Company of Archers, became a club-maker instead of following his father in the business of bow-making. He was followed by Thomas Comb and the McEwan family.  At the end of the century Frank Doleman took over the McEwan business at Bruntsfield and Tom Carruthers patented the modern hosel in 1891. The most famous golf ball-makers were the Gourlay family, possibly the best featherie ball makers of all time.

When the Council opened the Braids Hill course in 1889, it marked the death knell for the links game at Bruntsfield and Leith.

During the 18th century Musselburgh and St Andrews rose to prominence, largely because of the greater playing area which they afforded. However, Musselburgh remained just a 9-hole course while St Andrews not only expanded to 18 holes but built other courses and benefited from improvements by Old Tom Morris. Because of Old Tom and the presence of the Royal and Ancient, who took over control of the rules of golf in 1897, St Andrews eclipsed other places in Scotland where golf had flourished previously.

Recently map evidence was found supporting written reports of 1775 that golf was played on Calton Hill, as well as Arthur's Seat and Salisbury Crags.

A new book Bruntsfield Links - Home of Club Golf has been published in 2017, with significant new information on early golf club activity and golf-club makers there. Click here for more details.